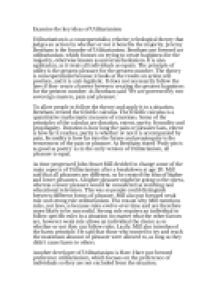 Examine the key ideas of Utilitarianism and to what extent are the strengths outweighed by the weaknesses?

﻿Examine the key ideas of Utilitarianism Utilitarianism is a consequentialist, relative, teleological theory that judges an action by whether or not it benefits the majority. Jeremy Bentham is the founder of Utilitarianism. Bentham put forward act utilitarianism, which focuses on trying to create happiness for the majority, otherwise known as universal hedonism. It is also egalitarian, as it treats all individuals as equals. The principle of utility is the greatest pleasure for the greatest number. The theory is consequentialist because it looks at the results an action will produce, and it is anti-legalistic. It does not necessarily follow the laws if they create a barrier between creating the greatest happiness for the greatest number. As Bentham said ?We are governed by two sovereign masters, pain and pleasure.? To allow people to follow the theory and apply it to a situation, Bentham created the felicific calculus. The felicific calculus is a quantitative mathematic measure of emotions. Some of the principles of the calculus are duration, extent, purity, fecundity and propinquity. ...read more.

Lastly, Mill also introduced the harm principle. He said that those who wanted to try and reach the maximum amount of pleasure were allowed to, as long as they didn?t cause harm to others. Another developer of Utilitarianism is Hare. Hare put forward preference utilitarianism, which focuses on the preference of individuals so they are not excluded from the situation. There are many reasons why Utilitarianism may be considered a convincing ethical theory; some of these may include the fact that it applies to secular parts of society. This allows non-religious believers to follow a theory that will not interfere with their values. Another reason why Utilitarianism may be considered as a convincing theory is because it is teleological instead of deontological, this allows individuals to make their own decisions. Furthermore, the theory is consequentialist. This allows people to evaluate the outcomes of their actions before committing them, which may prevent greater harm being inflicted upon society. Utilitarianism might also be considered a persuasive ethical theory because it provides followers with a method, the felicific calculus, to apply Utilitarianism in specific situations. ...read more.

His pain is outweighed by their pleasure. This is also another challenge of Utilitarianism. Emotions are not quantitative data; they are too subjective to be measured in a mathematical calculus. Despite the calculus providing individuals with a method to apply utilitarianism in situations, the calculus may be considered too complex for some. This may hinder their decision in a situation, which may result in more damage. Furthermore, the calculus requires the ability to predict the future, which is not possible. This downfall of the calculus outweighs any strengths it might have to offer. To conclude, I believe that to a large extent the reasons I mentioned before, are outweighed by the challenges in Utilitarianism. It is impossible to practically apply the theory when the hedonic calculus is flawed. Moreover, the main foundation of the theory is imprecise. It is idealist to try and create the greatest amount of pleasure for the greatest amount of people, however the reason why it has never been achieved is because emotions are too subjective and no one can measure the extent of the theory; therefore the strengths are outweighed by the challenges of the theory. ...read more.