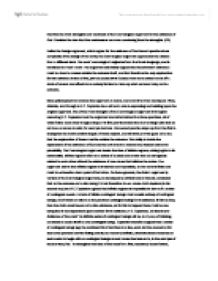 Examine the main strengths and weakness of the Cosmological argument for the existence of God. Consider the view that the weaknesses are more convincing than the strengths.

Examine the main strengths and weakness of the Cosmological argument for the existence of God. Consider the view that the weaknesses are more convincing than the strengths. (20) Unlike the Design argument, which argues for the existence of God based upon the sheer complexity of the design of the world, the Cosmological argument approaches the debate from a different slant. The word 'cosmological' originates from the Greek language, and is translated to mean 'order'. The argument essentially argues that the universe's existence must be down to causes outside the universe itself, and that therefore the only explanation for this existence is that a first, primary cause (First Causer) must have existed to set off a chain of causes and effects in an orderly fashion to make up what we know today as the universe. Many philosophers have taken the argument on board, and over time it has developed. Plato, Aristotle, and through to F.C. Copleston have all had a role in expanding and building upon the original argument. One of the main strengths of the Cosmological argument is its logical reasoning. F.C. Copleston took the argument and reformulated it as three premises, all of which follow each other in logical steps. ...read more.

Quantum physics also brings about weaknesses in the argument. Some schools of quantum mechanics claim that the existence of particles is down to probability. Experiments have shown empty space swarms with ephemeral particles that exist for no longer than the time taken by a light beam to cross an atomic nucleus, with no apparent cause for their existence. This of course, hit's the Cosmological argument at its core. The premise that cause and effect are always linked, with reference to Quantum physics, fails flatly. When applied to the universe, Quantum physics removes the need for a necessary being to begin the chain of causes and effects, and indeed the existence of God. Whether such particles do actually have a cause or not is a matter of debate, and some have said that the cause has just not been discovered as of yet, and in fact when the cause is found, Quantum physics can only be a support to the Cosmological argument. Another problem of the argument is hit when the realism of its premises is considered. Aquinas in his first way "from motion" argument begins by making conclusions based on evidence, making the arguments a posteriori. ...read more.

makes the object move (effect) where a connection is obvious. Quantum physics is under much debate currently, as some argue that there must be a cause for such particles to come into existence, yet this cause is just currently not known. These reasons, then, argue against the idea that the weaknesses of the argument are more convincing that the strengths, because Hume's weakness can seem completely unreasonable especially in terms of Newton's first law of inertia, and the Quantum physics weakness can also seem unreasonable as lack of cause demonstrates a lack of knowledge, demanding scientists look further into the explanation. In conclusion, then, the view that the weaknesses are more convincing than the strengths can be supported by way of scientific evidence and the need for a more complex explanation. However, its strength as an a posteriori argument remains, as it takes its evidence from real everyday life, such as the domino example. Each domino depends on the other for its fall, and the first domino is dependant on an external force for its falling. Whether this real-life example can be applied to the seemingly far more complex formation of the universe, though, is still a matter of debate. ?? ?? ?? ?? ...read more.