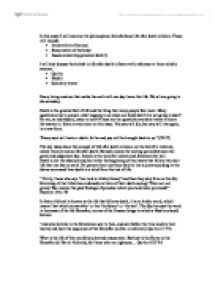 Examine the philosophical beliefs about life after death in Islam.

In this essay I will examine the philosophical beliefs about life after death in Islam. These will include: * Immortality of the soul * Resurrection of the body * Issues concerning personal identity I will also discuss the beliefs in life after death in Islam with reference to three reliable sources. * Qur'an * Hadith * Scholarly views Every living creature that walks the earth will one day leave this life. We all are going to die someday. Death is the greatest fact of life and the thing that many people fear most. Many questions arise to people, what happens to us when our body dies? Are we going to dust? Do we, as individuals, cease to exist? These are the questions everyone wants to know the answer to. Islam is very clear on this issue. Yes you will die, but you will live again, in a new form. "Every soul will taste or death. In the end you will be brought back to us." (29.57) The key ideas about the concept of life after death in Islam are the belief in Akhirah, which literally means life after death. Barzakh means the waiting period between the grave and judgement day. Jannah is the word for heaven and Jahannam for hell. Death is not the absolute end, but rather the beginning of the events that follow the short life that one has on earth. If a person then tries there hard to live a piety according to the divine command then death is a relief from the test of life. ...read more.

Nobody's love and commitments, in the earthly life, will save another person by giving away their good deeds. Nobody, on that day will remember their once beloved family, friends and relatives, during their earthly lives. The only person every individual will be thinking of during the Day of Judgement is him/herself. Allah has revealed this message in the Holy Qur'an: "One burdened soul shall not bear the burden of another. And even if the heavy-laden (soul) should cry out for its burden (to be carried) not one bit of it shall be carried, not even by the next of kin." (35:18). And: "It is the Day when one soul shall be powerless to plead for another." (82:19). Further: "To God belongs the mystery of the Heavens and the Earth. The Decision of the Hour (of Judgement) (will be swift as) the twinkling of an eye, or even quicker: for God has the power over all things." (16:77) After each person is judged, one would be rewarded or punished, according to their good /bad deeds. As we know that life after death is eternal, therefore the reward or the punishment will be eternal. This shows that the test of life is very important; it cannot be explained in words. Everyone will be allocated into groups based on a variety of factors, the main one is by belief, and then they will come forward on a level, standing behind those who they followed in the world. Below are two key references in the Qur'an which mention Day of Judgement are: "When the earth quakes with her (last) ...read more.

However the term nafs is used to describe the soul when it is connected to and occupying the body. The word rooh is used to describe the soul when it is apart or disconnected from the body. Islamically the soul is considered to be created entity- it is not part of extracted from God and is not connected to God in any physical or non Physical manner. According to Islam the soul of the individual exists the body on two occasions; during sleep, after which the soul is returned to the body upon awakening. The second occasion is at the time of death upon which the soul is not returned. The angels remove the soul from the organic body. This is explained in the Qur'an: 'It is Allah Who takes away the souls at the time of death, and those that die not during their sleep. He keeps those (souls) for which He has ordained death and sends the rest from a term appointed. Verily in this are signs for people who think deeply''. Az-Zumar, (39): 42 According to Islam the soul is an outer shell and the soul is within the body which makes a person, the soul is what makes you, you. The body is a physical material where the soul is a more like a spiritual. When one dies the body is buried, and after some time the body is decomposed. The soul does not die with the body; the soul is kept in a waiting stage, which is known as the Barzakh. The soul is waiting till the Day of Judgement The body will be resurrected and will be encountered for his her action on earth. Therefore the soul and the body survive death. ...read more.