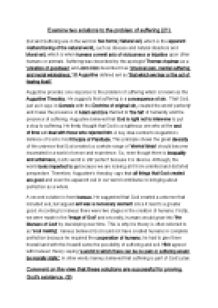 Examine two solutions to the problem of suffering

﻿Examine two solutions to the problem of suffering (21) Evil and Suffering are in the world in two forms; Natural evil, which is the apparent malfunctioning of the natural world, such as disease and natural disasters and Moral evil, which is when humans commit acts of viciousness or injustice upon other humans or animals. Suffering was described by the apologist Thomas Aquinas as a 'privation of goodness' and John Hick described it as 'physical pain, mental suffering and moral wickedness.' St Augustine defined evil as 'that which we fear or the act of fearing itself.' Augustine provides one response to the problem of suffering which is known as the Augustine Theodicy. He suggests that suffering is a consequence of sin. That God, just as it says in Genesis with the Doctrine of original sin, created the world 'perfectly' and it was the presence of Adam and Eve that led to 'the fall' of humanity and the presence of suffering. ...read more.

A second solution is from Iraneus. He suggested that God created a universe that included evil, but argued evil was a necessary element since it lead to a greater good. According to Iraneus there were two stages in the creation of humans. Firstly, we were made in the 'image of God' and secondly, humans would grow into 'the likeness of God' by developing over time. This is why his theory is often referred to as 'soul making'. Iraneus believed God could not have created humans in complete perfection because he required the cooperation of humans; he had to give them freewill and with this freewill came the possibility of suffering and evil. Hick agreed with Iraneus' theory saying 'a world in which there can be no pain or suffering would be morally static.' In other words Iraneus believed that suffering is part of God's plan. ...read more.

Therefore another strength is that it protects God's qualities and absolves him from blame. A strength of Iraneus' theodicy then is that it avoids some of the difficulties presented in Augustine's theodicy; belief in the fall isn't necessary. His theodicy also directly states that God deliberately created the world imperfectly. However, he suggests that all people eventually go to heaven. If everyone goes to heaven, then what is the point is behaving morally? This is a particularly weak criticism though, since it could be said God is benevolent and he allows for forgiveness and therefore wouldn't submit anyone to hell. Another criticism is that of the challenges of the world, not all of them result in positive human development. For example, who gained anything from the Holocaust? In conclusion, as Iris Murdoch said 'I cannot imagine any omnipotent and sentient being sufficiently cruel to create the world we inhabit.' So despite the attempts of both Augustine and Iraneus, suffering simply reinforces the atheist position that there is no God and poses serious questions to theists about God's nature. ...read more.