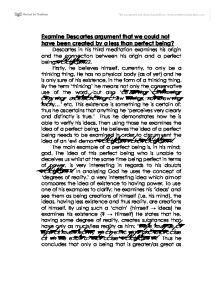 Examine Descartes argument that we could not have been created by a less than perfect being? Descartes in his third meditation examines his origin and the connection between his origin and a perfect being. Paragraph 22. Firstly, he believes himself, currently, to only be a thinking thing. He has no physical body (as of yet) and he is only sure of his existence, in the form of a thinking thing. By the term 'thinking' he means not only the conservative use of the word, but also 'doubting, affirming, denying, understanding a few things, not knowing many...' etc. This existence is something he is certain of; thus he ascertains that anything he 'perceives very clearly and distinctly is true.' ...read more.

In analysing God he uses the concept of 'degrees of reality,' a very interesting idea which almost compares the idea of existence to having power. To use one of his examples to clarify; he examines his 'ideas' and see them as being creations of himself (i.e. his mind), the ideas, having less existence and thus reality, are creations of himself. By using such a 'chain' (himself � ideas) he examines his existence (? � Himself) He states that he, having some degree of reality, creates substances that have only as much/less reality as him: 'There must be at least as much reality in an efficient and total cause as in the effort of that cause' Paragraph 14. ...read more.

the 'infinities': omnipotence, omniscience etc.) These modes do not apply to anything he has ever encountered; neither anything in the natural world nor himself. He, in himself, is flawed as he can be deceived, deception cannot occur to a perfect substance, as then it would be flawed as well and thus not perfect. Thus, overall, he believes that he does not have enough reality to come up with the concept of infinity Paragraph 23; for his flawed mind cannot conceive of such a perfect idea. He attributes the existence of such an idea to the being which we have discussed earlier, the being which is perfect (and thus the creator of his idea of infinity) and his creator (and thus of a greater degree of reality). This creator then places this idea in his head Paragraph 36. Thus he concludes his 'ontological argument'. ...read more.