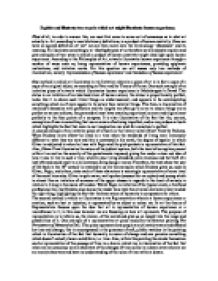 Explain and illustrate two ways in which art might illuminate human experience.

Explain and illustrate two ways in which art might illuminate human experience. First of all, in order to answer this, we must first come to some sort of consensus as to what art actually is. Art; according to most dictionary definitions, is a product of human creativity. Once we have an agreed definition of 'art' we can then move onto the terminology 'illuminate' and its meaning. To illuminate something is to 'shed light upon it' so therefore we are asked to explain and give examples of two ways in which a product of human creativity might shed light upon human experience. According to the Philosophy of Art, artwork illuminates human experience through a number of ways such as; being representative of human experiences, providing epiphanic realisations, and imitative works. For this question we will assess only two methods of illumination; namely 'representation of human experience' and 'imitation of human experience'. One method in which art illuminates is via Imitation wherein a piece of art is in fact a copy of a copy of an original object; as according to Plato and his Theory of Forms. ...read more.

Also, Oliver Twist illuminates the nature of the judicial system, both the level of corruption present within it as well as the severity of the punishments imposed, giving the reader a clear-cut idea of how it was to live in such a time; wherein your living standards were atrocious and the theft of a loaf of bread could result in a jail sentence, being hung or worse. Therefore, the truth about the way of life back in the 19th century is revealed to us via the examples which Dickens gives us; such as Oliver, Fagin, and others, since each of these characters is seemingly representative of some level of the social hierarchy. Oliver is quite naive, well-spoken (unusual for an orphan) and young which is almost like an imitation of someone of the upper classes in regards to the level of naivety in relation to living in the slums of London. Whilst Fagin is imitative of the typical crook; a thief and professional liar, but Dickens also shows the reader how even the criminal can have a heart and do the right thing; highlighting the fact that the base nature of humanity is compassion for others. ...read more.

the fact that when we are conscious we are observant of the changes of time unlike in a dream state wherein we are merely observers and have no understanding of the rules of time within a dream. A second example of representation in art is Picasso's Guernica which is representational of the German bombing of Guernica during the Spanish Civil War. This piece is illuminative of human experience due to the fact that it seems to represent the inhumanity, brutality and hopelessness of war via the imagery of broken bodies and lamenting faces. As a result of this then the Guernica is illuminatory of the reality of warfare and how ultimately, though wars may be a method of fighting against injustice, they also inherently produce it as a product of their cause. In conclusion, art is illuminative of human experience through both representation (The Guernica) and imitation (David) and allows for us to experience the feelings, memories, ideas and events that have occurred from the perspective of both the viewer/observer and the experiencer; thus art allows us to both empathise and sympathise with what is imitated or represented in art. (956 words) Low C grade ...read more.