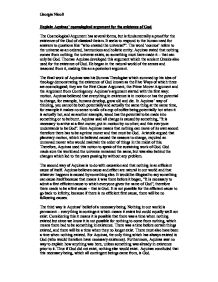 Explain Aquinas' cosmological argument for the existence of God The Cosmological Argument has several forms, but is fundamentally a proof for the existence of the God of classical theism. It seeks to respond to the human need for answers to questions like "who created the universe?". The word 'cosmos' refers to the universe as an ordered, harmonious and holistic entity. Aquinas stated that nothing comes from nothing; the universe exists, so something must have made it - that can only be God. Thomas Aquinas developed this argument which the ancient Greeks also used for the existence of God. He began in the natural world of the senses and reasoned from it, making this an a posteriori argument. The final work of Aquinas was his Summa Theologiae which summed up his idea of theology demonstrating the existence of God known as the Five Ways of which three are cosmological; they are the First Cause Argument, the Prime Mover Argument and the Argument from Contingency. Aquinas's argument started with the first way: motion. Aquinas believed that everything in existence is in motion or has the potential to change, for example, humans develop, grow old and die. In Aquinas' way of thinking, you cannot be both potentially and actually the same thing at the same time, for example it makes no sense to talk of ...read more.

There was a time before certain things existed, and there will be a time when they no longer exist. There must also have been a time when nothing existed. For Aquinas, the only thing which has always existed is God (who would therefore have necessary existence). Furthermore, Aquinas saw no way to explain how anything was here, unless something was already in existence prior to it. Thus if God did not exist, nothing else would exist. Aquinas concluded that this necessary being, which all contingent beings came from, is God. In conclusion it is evident that Aquinas' cosmological argument seeks to argue for the existence of God based on what we experience of the world and universe we live in. The central aim of the argument is to establish what caused everything to be here and how the world and the universe began. Hume's criticisms alone completely discredit the cosmological argument - Discuss This statement represents the view of those such as Kant, Russell and of course Hume himself who are against the cosmological argument because of various faults in the theory. I disagree with the statement as I believe the cosmological argument is a logical way of establishing how the world and universe began - there must have been something that is outside space and time, non-contingent and needed no cause of its own and this in my opinion was the superior power of God. ...read more.

Hume's next criticism is one of the lack of empiral evidence as there is no direct experience of the creation of the universe. Hume maintains that the Cosmological argument begins with familiar concepts of the universe and concludes with not-so-familiar concepts beyond human experience. For Hume, God's existence cannot be proven analytically since the definition of God's nature is not knowable. Hume concludes that it is not possible to prove the existence of a being who is unknowable and different from all other beings. When considering this I see Hume's point however there is no evidence of any experience of the creation of the universe therefore the idea of proof in this aspect of philosophy is, I believe, irrelevant. In conclusion, given the controversy and debates that surround the cosmological argument, including Hume's critiques, it is certainly apparent that the theory is not without its faults. That having being said, I do not believe that the criticisms of Hume completely discredit the argument as there is no proof of anything to do with the creation of the universe therefore every viewpoint can be reasoned with. Even today the cosmological argument remains appealing and credible and after balancing all opinions, although it is slightly contradictory when saying everything needs a cause except God, it stays a strong argument that Hume's critiques have not completely discredited. ?? ?? ?? ?? Georgia Nicoll ...read more.