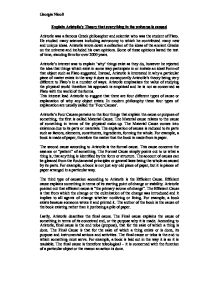 Explain Aristotles Theory that everything in the universe is caused

Explain Aristotle's Theory that everything in the universe is caused Aristotle was a famous Greek philosopher and scientist who was the student of Plato. He studied many sciences including astronomy to which he contributed many new and unique ideas. Aristotle wrote down a collection of the ideas of the ancient Greeks on the universe and included his own opinions. Some of these opinions lasted the test of time, standing firm for over 2000 years. Aristotle's interest was to explain 'why' things exist as they do, however he rejected the idea that things which exist in some way participate in or imitate an ideal Form of that object such as Plato suggested. Instead, Aristotle is interested in why a particular piece of matter exists in the way it does so consequently Aristotle's theory being very different to Plato's in a number of ways. Aristotle emphasises the value of studying the physical world therefore his approach is empirical and he is not as concerned as Plato with the world of the forms. ...read more.

The third type of causation according to Aristotle is the Efficient Cause. Efficient cause explains something in terms of its starting point of change or stability. Aristotle pointed out that efficient cause is "the primary source of change". The Efficient Cause is that from which the change or the culmination of the change was introduced and it implies to all agents of change whether nonliving or living. For example, a book exists because someone wrote it and printed it. The author of the book is the cause of the book existing rather than it just being a pile of paper. Lastly, Aristotle describes the final cause. The Final cause explains the cause of something in terms of its conceived end, or the purpose why it is made. According to Aristotle, final cause is the end telos (purpose), that for the sake of which a thing is done. The Final Cause is that for the sake of which a thing exists or is done, its purpose and instrumental actions and activities. ...read more.

Something that is pure actuality is clearly lacking some quality it should have; it is just what it should be - i.e it is good. Aristotle argued that the Prime Mover had to be immaterial. It could not be made of any kind of stuff, because matter is capable of being acted upon, it has potential to change. Since it is immaterial, it cannot perform any kind of physical, bodily action. Therefore, Aristotle thought, the activity of the Prime Mover, God, must be purely spiritual and intellectual. The prime mover is the Final cause for Aristotle, meaning the prime mover is the ultimate explanation of why things exist and to Aristotle, God is the prime mover - the unchanging cause of all that exists. Aristotle states that God relates to the universe as a leader, and in the order of the universe. The prime mover cannot in any way interact or act in the world, being an eternal, transcendent and impersonal being. In conclusion, Aristotle believes that everything is subject to cause and effect and that in the beginning, the prime mover drew everything in existence and all things strived to be like it as it is the perfect being. ?? ?? ?? ?? Georgia Nicoll ...read more.