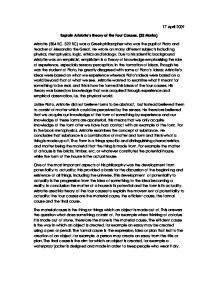 17 April 2009 Explain Aristotle's theory of the Four Causes. (33 Marks) Aristotle (384 BC- 322 BC) was a Greek philosopher who was the pupil of Plato and teacher of Alexandra the Great. He wrote on many different subjects including physics, metaphysics, logic, ethics and biology. Due to his scientific background Aristotle was an empiricist, empiricism is a theory of knowledge emphasising the role of experience, especially sensory perception, in the formation of ideas. Though he was the student of Plato, he greatly disagreed with some of Plato's ideas; Aristotle's ideas were based on what we experience whereas Plato's ideas were based on a world beyond that of what we see. Aristotle wanted to examine what it meant for something to be real, and this is how he formed his ideas of the four causes. His theory was based on knowledge that was acquired through experience and empirical observation, i.e. the physical world. Unlike Plato, Aristotle did not believe forms to be abstract, but instead believed them to consist of matter which could be perceived by the senses. He therefore believed that we acquire our knowledge of the form of something by experience and our knowledge of these forms are aposteriori, this means that we only acquire knowledge of the form after we have had contact with an example of the form. ...read more.

These four causes work together to form the potential and the actual object, the best example to use is a house. The material cause of the house is the bricks, the mortar, the wood and the glass; these are the things that cause the structure to eventually exist. The efficient cause of the house is the process of building it, digging and lying of the foundations, completing the brickwork, the roofing and so on. The formal cause of the house is the architect's plan, and the possibly the artist's impression, it is the design to which the house is finally made. The final cause of the house is the desire to create a dwelling for people to live in. However Aristotle did agree with Plato on the suggestion that everything in nature flows. This idea is that everything flows means that everything changes and therefore is mortal, i.e. things pass away and therefore all things are subject to the four causes. Aristotle said in Metaphysics ...all change is from what is potential to what is actually. From being potentially white, say to actually white. This is the reason why not only is there a coming-to-be from what-is-not accidentally, but every case of coming to be is also from what is. ...read more.

Aristotle went on to categorise different substances, many of which are brought about or changed by the four causes. He believed that there were three types of substance. He believed that there are substances which are evident but will decay or die, an example of this is a plant or animal. The second category sis that there are substances which are evident but will not decay or die, though today we know the world will die, Aristotle believed that the world would not die, as believed at the time he was writing. The final category is substances which are immune from any change for example a number two will always be number. In conclusion Aristotle believed that all things were caused to be and that some things, mainly the categories of one and two, were then caused to change from potentiality to actuality by the four causes. This idea about the causes and explanations are important because he manages to show that there can be several different reasons for something, all operating at the same time and often depending on each other as well. Aristotle idea for the four causes has been used in many theories today, including being a basis for the cosmological argument, but his ideas are also used in science today, practically physics. ...read more.