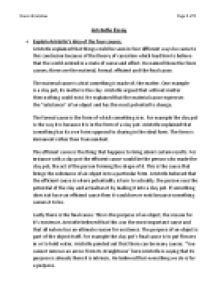 ﻿Naomi Bradshaw Page of Aristotle Essay 1. Explain Aristotle?s idea of the four causes. Aristotle explained that things could be seen in four different ways he came to this conclusion because of the theory of causation which lead him to believe that the world existed in a state of cause and effect. He named these the fours causes; these are the material, formal, efficient and the final cause. The material cause is what something is made of, the matter. One example is a clay pot; its matter is the clay. Aristotle argued that without matter then nothing could exist. He explained that the material cause expresses the ?substance? of an object and has the most potential to change. The formal cause is the form of which something is in. For example the clay pot is the way it is because it is in the form of a clay pot. ...read more.

For example the clay pot?s final cause is to put flowers in or to hold water, Aristotle pointed out that there can be many causes. ?You cannot remove an arrow from its straightness? here Aristotle is saying that its purpose is already there it is intrinsic. He believed that everything we do is for a purpose. Aristotle also said that the final cause for everything in the universe is the prime mover or the first cause. Aristotle argued that man?s ultimate purpose is to love and desire god, the prime mover. The prime mover was explained as being nothing like the theistic concept; but perfect and everlasting. Aristotle believed that the world was eternal but in this way we don?t need to think of God as the creator of the world. Aristotle explains that whatever brings about a change produces a chain and the origin of the chain must be unmoving or unchanging. ...read more.

He believes everything had an order, nothing came randomly. The reason of why a living thing may not achieve its purpose would be its final cause from the Unmoved Mover, God. Everything that Aristotle did was based on observation. He was accurate in his interpretation in what he had seen and observed by using all his senses to come up with a definite conclusion that everyone would believe. Many people would say that Aristotle?s theory of the four causes is not convincing because the idea that nature has a purpose is teleological. This disagrees with the statement because we don?t know whether anything has a purpose. For example we don?t know if every part of the human body has a purpose. Some would say that this is an error of composition which means that just because something is truth of some parts then there must be truth for the whole thing. The philosophy from the 20th century argues that there is no purpose that things exist. People have purposes because they chose to have them not because they are born with them. ...read more.