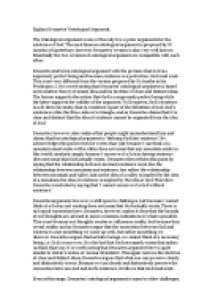 Therefore Descartes concludes by saying that ?I cannot conceive of a God without existence?. Descartes argument, however, is still open to challenges. Just because I cannot think of a God as not existing does not mean that God actually exists. There is no logical connection here. Descartes, however, makes it clear that the bounds of our thoughts are, at least in some occasions, indications of what is possible. This is not because our thoughts creates or influences reality, but because they reveal reality; and so Descartes argue that the connection between God and existence is not something we come up with, but rather something we discover. Descartes argues that as finite beings, we cannot think of a necessary being, i.e. God, on our own. It is the fact that God necessarily exists that makes us think that way. It is worth noting that Descartes argument here is quite similar to Calvin?s notion of ?sensus divinitatis?. ...read more.

The conclusion of Descartes? ontological argument is not that God exists, but that God exists necessarily. Here, Descartes? ontological argument is very similar to St Anselm?s. St Anselm argues that because God is a being ?that than which no greater can be conceived?, God must exist by necessity because otherwise it would not be the greatest being. Aquinas and later, Caterus, argues that it still does not show that God exists in reality. At best, Descartes? ontological argument shows that the concept of existence in inseparable from the concept of God, or in other words, if God exists, God exists necessarily. Descartes responds to this objection by saying that this overlooks two things: first, his doctrine that clear and distinct ideas are true; and second, necessary existence is part of the concept of God entails God?s actual existence. If it is part of the concept that God must exists, then God must exists. This, however, can be said to be an unsatisfactory response, since Caterus? criticism is precisely that a conceptual connection does not point to a connection in reality. ...read more.