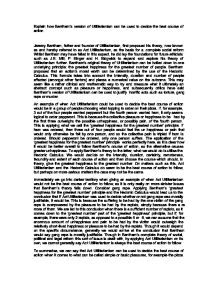 Explain how Bentham's version of Utilitarianism can be used to decide the best course of action. Jeremy Bentham, father and founder of Utilitarianism, first proposed his theory, now known as and hereby referred to as Act Utilitarianism, as the basis for a complete social reform. Whilst Bentham may have failed in this aspect, he did lay the foundations for future ethicists such as J.S. Mill, P. Singer and H. Sidgwick to expand and explore his theory of Utilitarianism further. Bentham's original theory of Utilitarianism can be boiled down to one underlying principle; the greatest happiness for the greatest number of people. Bentham proposed that an action's moral worth can be determined by the use of the Hedonic Calculus. This formula takes into account the intensity, duration and number of people affected (amongst other factors) and places a numerical value on the outcome. This may seem like a rather clinical and mathematic way to try and measure what it ultimately an abstract concept such as pleasure or happiness, and subsequently critics have said Bentham's version of Utilitarianism can be used to justify horrific acts such as torture, gang rape or murder. ...read more.

To apply Bentham's theory to the letter, what we would do is utilise the Hedonic Calculus. We would decide on the intensity, duration, certainty, remoteness, fecundity and extent of each course of action and then choose the course which should, in theory, give the greatest happiness to the greatest number. On matters such as this, Act Utilitarianism and the Hedonic Calculus do seem to be the best course of action to follow, but perhaps on more serious matters the case may not be the same. Immediately we go into darker territory when giving an example of when Act Utilitarianism would not be the best course of action to follow, as it is only really on more sinister issues that Bentham's theory falls down. Consider gang rape. Applying Bentham's 'greatest happiness for the greatest number' principle and the Hedonic Calculus would lead us to the conclusion that if Act Utilitarianism was used to decide whether or not gang rape was morally justifiable, it would be. ...read more.

can be called simple or basic pleasures, for example the pizza topping, as the ultimate consequence of following the Hedonic Calculus is never, or at least is rarely, sufficient enough to constitute not doing so. On the other hand, when we consider actions such as gang rape or torture, the Hedonic Calculus would generally have us encourage the action, although it can be argued that this is taking Act Utilitarianism out of context, and that any ethical theory only works when applied as a whole. To conclude, Jeremy Bentham's version of Utilitarianism can be used to decide the best course of action when it is applied to issues which do not generally have dire or particularly painful consequences. It may also be equally applicable when applying Bentham's entire theory of justice, though the supposed action in theory can never be certified to be the same as the resultant action in reality, so we can never be sure as to whether or not Act Utilitarianism in its entirety would always be used to decide the best course of action. ?? ?? ?? ?? ...read more.

This essay includes the basic points about Bentham's classical act utilitarianism. For this sort of "explain" question, not much further detail is required and so the evaluation of Bentham's theory is not required. Instead, more information about the hedonic calculus would be good.