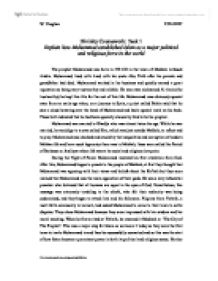 Explain how Muhammad established Islam as a major political and religious force in the world.

Divinity Coursework: Task 1 Explain how Muhammad established Islam as a major political and religious force in the world The prophet Muhammad was born in 570 CE in the town of Makkah in Saudi Arabia. Muhammad lived with lived with his uncle Abu Talib after his parents and grandfather had died. Muhammad worked in his business and quickly earned a great reputation as being very trustworthy and reliable. He was even nicknamed Al-Amin (the trustworthy) he kept this title for the rest of this life. Muhammad was obviously special even from an early age when, on a journey to Syria, a priest called Bahira said that he saw a cloud hovering over the head of Muhammad and had a special mark on his back. ...read more.

He was a very influential preacher who believed that all humans are equal in the eyes of God. Nevertheless, this message was extremely troubling to the chiefs, who felt their authority was being undermined, and they began to attack him and his followers. Pilgrims from Yathrib, a multi faith community in turmoil, had asked Muhammad to come to their town to settle disputes. They chose Muhammad because they were impressed with his wisdom and his moral teaching. When he first arrived at Yathrib, he renamed it Madinah or 'The City of The Prophet'. This was a major step for Islam as we know it today as they were the first town to invite Muhammad in and then be successfully converted and so this was the start of how Islam became a prominent power in both its political and religious sense. ...read more.