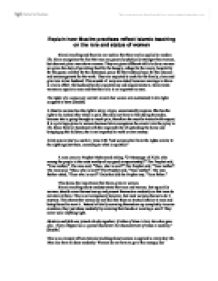 Explain how Muslim practises reflect Islamic teaching on the role and status of women Islamic teaching and theories are such so that they can be applied to modern life. Islam recognizes the fact that men are generally physically stronger than women, but does not place men above women. They are given different skills to do so women are given the duty of providing food for the hungry, refuge for the weary, hospitality for the guest, comfort for the distressed, peace for the troubled, hope for the insecure and encouragement for the weak. They are expected to cook for the family, clean and give love to her husband. This sounds all very one sided, however marriage in Islam is a team effort- the husband has his expectations and requirements to. Islam treats women as equals to men and that their role is as important as men. The rights of a woman are sacred; ensure that women are maintained in the rights assigned to them [Hadith] A Muslim woman has the right to stay a virgin, unmolested by anyone. ...read more.

Islamic teaching about modesty states that men and women, but especially women, should cover themselves up and present themselves modestly so that men do not stare at them. This is not compulsory however, but most women choose to do it anyway. This shows that women do not feel that they are treated inferior to men and being forced to wear it. Instead of totally covering themselves up completely in some countries, they just dress modestly by covering their heads or wearing a scarf. They never wear anything tight. Modesty and faith are joined closely together; if either of them is lost, the other goes also. Every religion has a special character; the characteristic of Islam is modesty" [Hadith] This is an example of how Islamic teaching about women is applied in every day life. Men also have to dress modestly. Women do not have to go to the mosque, but instead pray at home. This reflects the teaching about women having to bring up the household. Since this is their duty, they are allowed to pray at home. ...read more.

He should not think of her a servant and that she must make his dinner. She doesn't but she probably does because marriage in Islam is give and take. He should consult her when making decisions, because women are just as important and clever as men. So Muslim couples discuss things and work things out together and do not take each other for granted. Women have as much of a right to pray in a mosque as a man, since everyone is equal. "All people are equal...as the teeth of a comb. No Arab can claim merit over a non-Arab, nor a white over a black person, nor a male over a female" [Hadith] What happens is that the men pray at the front, while the women pray at the back behind a sheet or curtain. The reason for the men being at the front is not that men are superior, but to prevent any flirtatious thoughts by the men and help them focus on Allah rather than the opposite sex. There are many rules concerning women, and these have been incorporated into modern life so that they still hold true to the rule. ...read more.