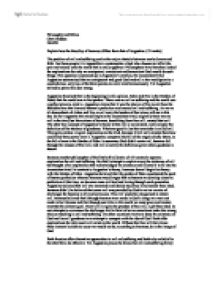 Explain how the theodicy of Irenaeus differs from that of Augustine and Evil cannot be fully explained by the theodicies, discuss.

Philosophy and Ethics Chris Hadden 26/4/09 Explain how the theodicy of Irenaeus differs from that of Augustine. (25 marks) The problem of evil and suffering can be the major obstacle between non believers and faith. For these people it is impossible to contemplate a God who chooses to inflict the pain and misery onto the world that is easily apparent. Philosophers have therefore looked for explanations for why an omnipotent, omniscient and benevolent God would do such things. This question is summed up in Augustine's creation, the inconsistent triad. Augustine summarised that an omnipotent and good God and evil in the world point to a contradiction, only two of the three points can ever exist harmoniously. Yet Augustine strived to prove this idea wrong. Augustine theorised that in the beginning (in his opinion Adam and Eve in the Garden of Eden) that the world was in fact perfect. There was no evil or suffering and the world was a perfect place to exist in. Augustine claims that it was the choice of Eve to eat from the forbidden tree that lowered human's perfection and created evil and suffering. As we are all descendants of Adam and Eve, we all carry the burden of that crime with us to this day. ...read more.

In our attempts to overcome the challenges laid in front of us we sometimes make the wrong choices resulting in evil and suffering. On other occasions we try to deny the existence of God and lose all goodness in an attempt to compete with the idea of God. Both offer explanations for why moral evil exists in the world. Without the free will that allows these immoral actions to occur we would not be, according to Irenaeus, be in the image of God. Both theories offer alternative approaches to evil and suffering and both rely on belief in the afterlife to be effective. Yet Augustine places the blame for evil and suffering firmly at the door of mankind whereas Irenaeus places evil and suffering in the natural order of things describing it as a way in which God matures us as individuals and draws us closer to him. Evil cannot be fully explained by the theodicies, discuss. (10 marks) Despite the arguments of both Irenaeus and Augustine, atheists and agnostics alike are not convinced. This is mainly down to the unanswered questions that the theodicies leave in their wake. Many find the clinical almost mathematic approach to the problem to be insensitive and unrealistic when you look at cases of extreme suffering. ...read more.

In Augustine's theodicy we are introduced to the idea that evil is just the absence for good. Yet serious evil such as murder, rape, child abuse, or terrorism seem to be much more than simply the absence of good, there is for many a difference between lack of good and evil. With reference to the idea that Augustine's idea that forces of good and evil are in a battle, this introduces the idea that there is hell. Yet if God is in fact omnipotent why does he allow such a place to exist? Yet there is definite value in the theodicies, they offer logical and well reasoned explanations for why there is evil and suffering in a world created by an omnipotent, omnipresent, benevolent God. Augustine uses the idea presented within The Bible, (the most popular book ever) that Eve was at fault for the fall of mankind. This idea sits well with people who do believe in the creation story. Evil as part of Irenaean theory is not a punishment but a tool to for "soul making" (John Hick). This theory allows people to have optimism through suffering and gives value to the growth that follows suffering. So despite the flaws of the two main theodicies there are strong cores to both ideas that can offer solace for people struggling with the problem of evil and suffering. ...read more.