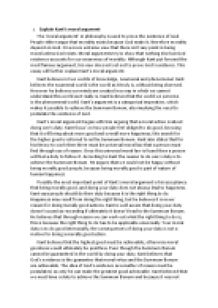 ﻿1. Explain Kant?s moral argument The ?moral argument? in philosophy is used to prove the existence of God. People either argue that morality exists because God made it, therefore morality depend on God. Or a more extreme view that there isn?t any point in being moral unless God exists. Moral arguments try to show that nothing else but God existence accounts for our awareness of morality. Although Kant put forward the most famous argument, his view does not set out to prove God?s existence. This essay will further explain Kant?s moral argument. Kant believes in two worlds of knowledge, noumenal and phenomenal. Kant believes the noumenal world is the world as it truly is, without being observed. ...read more.

According to Kant the reason to do one?s duty is to achieve the Summum Bonum. He argues that we could not be happy without being morally good people, because being morally good is part of nature of human happiness. Possibly the most important point of Kant?s moral argument is his acceptance that being morally good, and doing your duty does not always lead to happiness. Kant says people should do their duty because it is the right thing to do. Happiness may result from doing the right thing, but he believes it is never reason for doing morally good actions. Kant is well aware that doing your duty doesn?t sound as rewarding if ultimately it doesn?t lead to the Summum Bonum. ...read more.

In conclusion, Kant doesn?t see his moral argument as a proof that God exists, but he believes that in order for moral behaviour of human beings to make sense, we must postulate three things. The three postulates of morality are; free will, immortality and the existence of God. He believed an action is only truly moral if we chose it freely through our own choice. He also argues that acting according to our moral autonomy should result in happiness as demanded by justice. As this doesn?t happen, there must be life after death. The final part of the conclusion of Kant?s moral argument is that God must exist as a postulate of practical reason. Without the existence of God we cannot have the afterlife and we would not be able to fulfil our obligation of reaching the Summum Bonum. ...read more.

This student written piece of work is one of many that can be found in our AS and A Level Ethics and Morality section.

Related AS and A Level Ethics and Morality essays