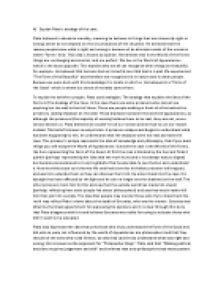 &quot;Explain Plato's Analogy of the Cave&quot; and Platos Theory of Forms tells us little about reality Discuss.

﻿1. Explain Plato?s analogy of the cave. Plato believed in absolute morality, meaning he believes in things that are inherently right or wrong, which do not depend on the circumstances of the situation. He believed that the reason people know what is right and wrong is because of an alternate realm of the universe where ?Forms? exist. This idea is known as dualism. He believes that in the World of the Forms things are unchanging and eternal, and are perfect. We live in the World of Appearances which is the exact opposite. This explains why we all can recognise when things are beautiful, for example. He believed that humans had an immortal soul that had in a past life experienced ?The Form of the Beautiful? and therefore we recognise this in nature and in other people. Because we were born with this knowledge it is innate in all of us. He believed in a ?Form of the Good? which is where our sense of morality comes from. To explain his beliefs to people, Plato used analogies. ...read more.

The idea that people may murder those who try to show them the truth may reflect Plato?s views about the death of Socrates, who was his mentor. Socrates was killed by the Greek government for expressing his opinions and it is clear through this story that Plato disagrees with this and believes Socrates was noble for trying to educate those who didn?t want to be educated. Plato also expressed the idea that only those who truly understood the Form of the Good and did who so were not influenced by the world of Appearances are philosophers and that they should be the ones who ruled Greece, as only they could truly understand what was right and wrong, this is known as the argument for ?Philosopher Kings.? Plato said that ?Making political decisions requires judgement and skill? and believed that only philosophers had those powers. 1. ?Plato?s Theory of Forms tells us little about reality? Discuss Plato?s World of the Forms is a separate realm to reality, or as he puts it ?The World of Appearances? and is the exact opposite of our reality, so some would argue that it tells us little about reality because it?s not supposed to. ...read more.

Ayer?s verification principle states that something has to be able to be reproduced and proved with evidence and he believed that religious language was unverifiable and therefore was nonsense and irrelevant to us. However most people do seem to have a conscience that agrees on certain things e.g rape is wrong and so Plato?s theory does explain why that might be. Many arguments against Plato?s Theory of Forms may also be arguments against religion, as Plato?s Form of the Good is very similar to an idea of God found in monotheistic religions, as it is the source of morality and exists outside of our universe, however there are obvious differences, for example, Plato?s Form of the Good did not create the universe. In conclusion, I agree with the idea that Plato?s theory of the forms tells us little about reality because I don?t believe that it can be applied to reality. This is because the idea of the World of the Forms is in itself separate from our reality. However, I believe it is a useful idea in terms of where our morality comes from, but I am more convinced by other ideas, such asour own conscience and the influence of the society we grow up in. ...read more.