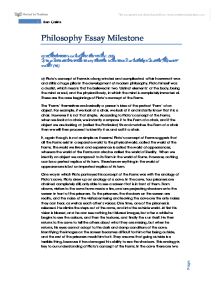 Explain Platos concept of the Forms. To what extent is it true to say that the forms teach us nothing about the physical world?

Philosophy Essay Milestone a) Explain Plato's concept of the 'Forms'. (25) b) To what extent is it true to say that the forms teach us nothing about the physical world? (10) a) Plato's concept of Forms is a long winded and complicated affair however it was and still is a huge pillar in the development of modern philosophy. Plato himself was a dualist, which means that he believed in two 'distinct elements' of the body, being the mind or soul, and the physical body, in which the mind is completely immaterial. These are the core beginnings of Plato's concept of the Forms. The 'Forms' themselves are basically a person's idea of the perfect 'Form' of an object. For example, if we look at a chair, we look at it and instantly know that it is a chair. However it is not that simple. According to Plato's concept of the Forms, when we look at a chair, we instantly compare it to the Form of a chair, and if the object we are looking at (called the Particular) ...read more.

Identifying the images on the screen becomes difficult for him after being outside, and the rest of the prisoners mock him for it. They assume that going outside is a terrible thing, because it has damaged his ability to see the shadows. This analogy is key to our understanding of Plato's concept of the Forms. In the cave there are two settings, the cave and the outside of the cave. The cave can be seen as the world of appearances, and the outside world can be the world the forms. The prisoners themselves can be seen as the majority of the population of the world; people who take what they see and assume that that is all there is to life, and don't desire to look into it any further. All of the shadows seen on the screen in the cave by the prisoners are particulars, as they are the fake reality that the prisoners are seeing, and the objects (tree's, bushes, flowers) outside the cave can be seen as forms. The prisoner who escapes from the cave can be seen as a philosopher. ...read more.