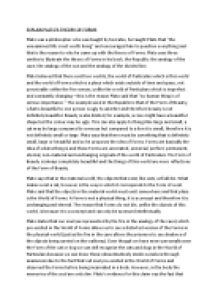 Transfer-Encoding: chunked ﻿EXPLAIN PLATO?S THEORY OF FORMS Plato was a philosopher who was taught by Socrates, he taught Plato that ?the unexamined life is not worth living? and encouraged him to question everything and that is the reason to why he came up with the theory of Forms. Plato uses three similes to illustrate the theory of Forms in his book, the Republic: the analogy of the cave, the analogy of the sun and the analogy of the divided line. Plato believed that there exist two worlds, the world of Particulars which is this world and the world of Forms which is a place which exists outside of time and space, not perceivable within the five senses, unlike the world of Particulars which is imperfect and constantly changing ? this is the reason Plato said that ?no human thing is of serious importance.? The example used in the Republic is that of the Form of Beauty; what is beautiful to one person is ugly to another and therefore beauty is not definitely beautiful. ...read more.

The reason that Forms do not die, unlike the objects of this world, is because it is a concept and can only be accessed intellectually. Plato states that our soul (as represented by the fire in the analogy of the cave) which pre-existed in the World of Forms allows us to see a distorted version of the Forms in the physical world (just as the fire in the cave allows the prisoners to see shadows of the objects being carried on the walkway). Even though we have never personally seen the Form of the cat or dog we can still recognise the cats and dogs in the World of Particulars because we can know these ideas intuitively inside ourselves through anamnesis due to the fact that out soul pre-existed in the World of Forms and observed the Forms before being incarnated in a body. However, in the body the memories of the soul are only dim. Plato?s evidence for this claim was the fact that people can have a basic understanding of something like truth, justice or beauty without being taught it. ...read more.

Plato says that sight requires light to see clearly and light symbolises the Form of the Good, what he is trying to say is that without the knowledge of the Form of the Good one does not see clearly, the same as trying to see in the dark. His idea is teleological in that everything aims towards the Form of the Good. In conclusion, Plato?s theory of Forms is the theory that the world we live in is a world of illusions and opinions and there exists a real world, called the World of Forms which can be accessed intellectually. It contains the original copies of the objects of the world we live in such as trees and it is called the Form of a tree. The reason he came up with the theory is because there is no definite answer of things in the World of Particulars, for example, beauty ? there is no definite answer to what beauty is but in the World of Forms there is only one Form of Beauty and that is the only things that is actually Beautiful. ...read more.