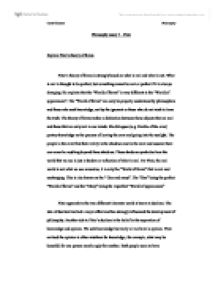 Philosophy essay 1 - Plato Explain Plato's theory of forms Plato's theory of forms is strongly based on what is real and what is not. What is real is thought to be perfect, but something cannot be real or perfect if it is always changing. He explains that the "World of forms" is very different to the "World of appearances". The "World of forms" can only be properly understood by philosophers and those who seek knowledge, not by the ignorant or those who do not wish to learn the truth. The theory of forms makes a distinction between those objects that are real and those that are only real in our minds. His dialogues (e.g. Parable of the cave) portray knowledge as the process of leaving the cave and going into the sunlight. The people in the cave find their reality in the shadows cast in the cave and assume there can never be anything beyond these shadows. ...read more.

It leads to discovering the "Form of Good" and therefore Plato believed that philosophy made you a better person. This theory is important for understanding and objects true nature. For example, a cat is not a dog and not a mouse, but yet it has four legs and a tail like the other two animals have, so how is it that we can distinguish a cat from a dog of a mouse? Plato believed that each animal has a perfect form, the cat has perfect cat-ness that makes us recognise a cat when we see one. This perfect cat-ness is only found in the "World of forms" which God created as the ideal cat, this cat is the only real cat and all the others are just shadows of it. True knowledge means abandoning the senses and understanding this "World of forms". To contemplate what we see and realise that it is not real, to try and see the world beyond the imperial information we receive. ...read more.

People who are comfortable with this "World of appearances" or " The Matrix" will feel extremely insecure in finding out that what they see is not real. The ignorant are symbolised by the people in "The Matrix", only seeing what they are allowed to see. The people who escape "The Matrix" are symbolised as the philosophers, these people understand both worlds and can interpret what they know much more accurately than the ignorant because they have knowledge and not just opinion. The ignorant never really know the whole truth, simply because they do not seek it. This may be because they have no desire for additional knowledge and therefore have no idea of the alternate reality. This therefore shows that Plato's theory has little use in this physical world to anyone who has not gained knowledge from both the "World of forms" and the "World of appearances" and have only opinion. Those not understanding the physical world would therefore see little use in Plato's theory of forms. Coral Gilmore Philosophy ...read more.