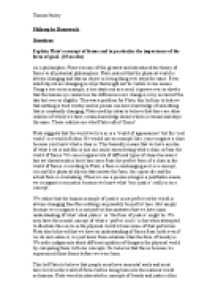 ﻿Thomas Hurley Philosophy Homework Questions Explain Plato?s concept of forms and in particular the importance of the form of good. (25 marks) As a philosopher, Plato was one of the greatest and introduced the theory of forms to all potential philosophers. Plato noticed that the physical world is always changing and that no object or living thing ever stays the same. Even solid objects are changing in ways that might not be visible to our senses. Using a tree as an example, a tree starts out as a seed, it grows ever so slowly that the human eye cannot see the differences as it changes every second of the day but ever so slightly. This was a problem for Plato, this led him to believe that nothing is trust worthy and no person can have knowledge of something that is constantly changing. Plato used his ideas to believe that there are other realities of which we have certain knowledge about which is eternal and stays the same. ...read more.

We make judgements about different qualities of things in the physical world by comparing them with our concepts. He believes that this is because we experienced these forms before we were born. This led Plato to believe that people must have immortal souls and must have lived in the world of forms before being born into the material world as humans. Plato was also interested in concepts of beauty and justice other than just objects. He observed that concepts such as beauty can be applied to many different objects e.g. a person is beautiful, as is a flower and building. This concept does not explain how there can be different forms of beauty as there must be different definitions of what it is. Plato used the analogy of the cave to illustrate the world of forms, there are many ways to interpret it but Plato basically tries to explain that the person who breaks free of the cave and discovers the sunlight is the only person with true knowledge. ...read more.

Discuss. (10 marks) This statement is probably what the majority of people think when learning about Plato and his theory of forms. Many people would discard his theory as ideas of justice/beauty are not forms but just ideas in people?s minds that are passed on to others. If people die without passing on the idea, the idea will die out with the person. You can argue that ideas are not independent of the mind in which they are preserved. One persons idea could be passed to hundreds of people if it is plausible to modern day life, yet people agreeing with the idea making it their own. People would also agree with the statement as they could argue that there cannot possibly be forms of everything in our physical world e.g. forms of a bus ticket, forms of different types of mobile phones. The biggest criticism of Plato?s theory is that the existence of any other world apart from the world of appearances cannot be proven, giving no evidence or clue that the world of forms even exists. ...read more.