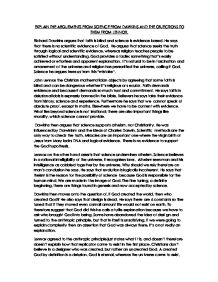 EXPLAIN THE ARGUEMENTS FROM SCIENCE FROM DAWKINS AND THE OBJECTIONS TO THEM FROM LENNOX.

EXPLAIN THE ARGUEMENTS FROM SCIENCE FROM DAWKINS AND THE OBJECTIONS TO THEM FROM LENNOX. Richard Dawkins argues that faith is blind and science is evidence based. He says that there is no scientific evidence of God. He argues that science seeks the truth through logical and scientific evidence, whereas religion teaches people to be satisfied without understanding. God provides a facile; something that's easily achieved or effortless and apparent explanation. It's natural to be in fascination and amazement of the universe and religion has personified the universe, calling it God. Science he argues frees us from this "mistake". John Lennox the Christian mathematician objects by agreeing that some faith is blind and can be dangerous whether it's religious or secular. ...read more.

Lennox on the other hand asserts that science undermines atheism. Science believes in a rational intelligibility of the universe, it recognises laws. Atheism sees man and his intelligence as cobbled together by the universe. Why should we rely therefore on man's conclusion he says. He says that evolution is logically incoherent. He says that theism is the reason for the possibility of science because God is responsible for the human mind. We are made in the image of God. The fine tuning, a definite beginning, there are things found in genesis and now accepted by science. Dawkins then moves onto the question of, if God created the world, then who created God? He also says that design is dead. ...read more.

Explanations in science are usually in terms of increasing complexity, simplicity isn't the only criteria of truth. An archaeologist for example goes into a cave and sees two scratches on a wall and says it's an ancient symbol, which proves the existence of intelligent human life. In the same way that Dawkins believes the universe is its own explanation, so consider a page of writing. The message is not in the explanation of the paper and ink but rather in the mind of the creator. He concludes by saying that if Dawkins is happy to accept the theory of everything in cosmology as tenable; able to be maintained or defended against attack or objection, then why will he not accept God as a creator? Dawkins and Lennox share contrasting views and their views are parallel to one another. Their thoughts never converge neither do they interact. BY MOHAMED ILLYAS ...read more.