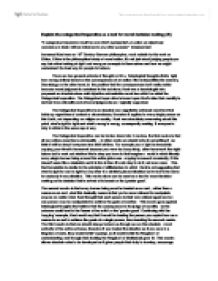 “A categorical imperative would be one which represented an action as objectively necessary in itself, without reference to any other purpose” Immanuel Kant

Immanuel Kant was an 18th Century German philosopher, most notable for his work on Ethics. Ethics is the philosophical study of moral action; it’s not just about judging people per say but rather looking at right and wrong as concepts in themselves and how we might understand the best way for people to behave.

There are two general schools of thought on this, Teleological thoughts divide right from wrong entirely based on the consequences of an action (‘the ends justifies the means’), Deontology on the other hand, is the position that the consequences don’t really matter because moral judgment is contained in the act alone. Kant was a deontologist who proposed an absolute stone cold objective unbreakable moral law which he called the Categorical Imperative. The Categorical Imperative is based upon Kant’s idea that morality is derived from rationality and all moral judgments are logically supported.

The Categorical Imperative is an absolute non negotiable universal moral law that holds up regardless of context or circumstance, therefore it applies to every single person on this Earth, not depending on religion or society. Kant was absolutely unwavering about this point; what’s right is right and what’s wrong is wrong, consequently making it everyone’s duty to abide in the same equal way.

The Categorical Imperative can be broken down into 3 maxims, the first maxim is that all our actions must have universality – in other words we should only do something if we think it will be okay if everyone else did it all time. For example you might be innocently copying your friend’s homework because you were too busy doing other homework the night before but to work out whether this is okay you have to first imagine a world in which literally every single human being around the entire globe was copying homework constantly, if this doesn’t seem like a desirable world to live in then it’s not okay to do it, not even once. This first formulation is similar to the principle of utilitarianism in which Kant is not suggesting that what is right for one is right for any other in a similarly placed situation but in fact is the same for anybody in any situation. This maxim alone can be used as a tool for moral decision making as the decision that is arrived at is based on the ‘greater good’.

The second maxim is that every human being must be treated as an end, rather than a means as an end, what this basically means is that you’re never allowed to manipulate anyone no matter what. Kant thought that each person is their own rational agent and no one person may be manipulated to achieve the goals of another. This maxim goes against teleological thoughts that believe that the consequence is the judge of morality as the outcome could lead to the ‘lesser of two evils’ or the ‘greater good’. Continuing with the ‘copying’ example, Kant would say that it would be treating the person you copied from as a means to an end to achieve the goals of a single person, thus breaking the second maxim. The third maxim is that we should always behave as though we are the absolute moral authority of the entire universe, therefore if you treated the situation as if you were in a kingdom of ends, they would forbid ‘copying’, as it would forbid the ‘kingdom’ of understanding and through that stunting the ‘kingdom’ of intellectual growth. This maxim allows absolute rules to be developed as it gives people their duty to develop, encourage and provide own freedom and moral intellectuality without any restraints, take for example sweatshops in Asia, where thousands of children are being exploited to manufacture consumer goods for the western culture, the categorical imperatives would argue that this is morally wrong as in this example people are being oppressed and used to achieve the goals of others.

In conclusion, the categorical imperative is a three point method that allows people to distinguish acts as being considered moral or immoral; it also stimulates the belief that it is one’s duty to seek good morals. Kant believes that our ethical statements should be reinforced ‘a priori’ logical reasoning that lead to our proposed action being an absolute objective moral law