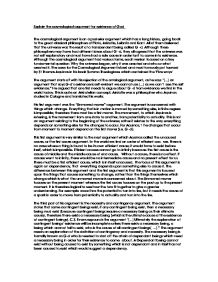 Explain the cosmological argument for existence of God

Explain the cosmological argument for existence of God The cosmological argument is an a posterior argument which has a long history, going back to the great classical philosophers of Plato, Aristotle, Leibnitz and Kant. All of them believed that the universe was the result of a transcendent being called G-d. Although these philosophers may have had different ideas about G-d, they all agreed that the universe was not self explanatory and must have had a sole cause in order for it to come into existence. Although the cosmological argument had various forms, each version focused on a key fundamental question: Why the universe began, why it was created and who or what created it. The case for the Cosmological Argument is best and most famously put forward by St Thomas Aquinas in his book Summa Theologicae which contained the 'Five ways' The argument starts off with his rejection of the ontological argument, as he says "[...] an argument that says G-d's existence is self-evident we cannot use [...] as we can't see the self evidence." He argued that one first needs to argue about G-d from evidence we find in the world today. This is quite an Aristotelian concept; Aristotle was a philosopher who Aquinas studied in Cologne and translated his works. His first argument was the "Unmoved mover" argument. The argument is concerned with things which change. ...read more.

The continuous questioning is part of human nature; we cannot accept that the universe may be a reality itself as it has not been proved. We therefore need to believe in some external intelligent creator. Aquinas' argument is the product of this human belief that we are the subject of design, in a series of causes and effects that can be traced to a definite cause which itself is uncaused. Aquinas is logical and his argument understandable, but it is in human logic and experience which it is trapped and ultimately flawed where it fails to look beyond human experience, something that we cannot ourselves image but rather to speculate over, as we will never know what there was before the universe. Hume's criticisms consider these possibilities, making sense logically and outlining limitations of human experience. "We are prepared to argue that because there are causes of things within the universe, there is a cause for the universe as a whole?" we do not know because there is no way of knowing. Furthermore, the advances made in recent years in science shows that an effect does not follow on from a cause from the advances in quantum physics, particles can come into existence with no explanation. Aquinas' logic is understandable, and the argument believable, but it is the expansion of human understanding and discovery that will eventually disprove logic as we encounter the unbelievable and so his argument will become less convincing over time. ...read more.