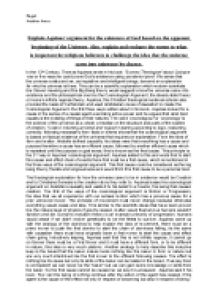 Explain the Cosmological Argument for the existence of God, according to Aquinas

﻿Page Heather Amos Explain Aquinas? argument for the existence of God based on the apparent beginning of the Universe. Also, explain and evaluate the extent to what is important for religious believers to challenge the idea that the universe came into existence by chance. In the 13th Century, Thomas Aquinas wrote in his book ?Summa Theologiae? about Quinque viae or five ways he could prove God?s existence using aposteriori proof. We sense that the universe exists and we, as inquisitive and intelligent beings, demand an explanation for why the universe is there. This can be a scientific explanation which modern scientists like Steven Hawking and this Big Bang theory would suggest is how the universe came into existence and the philosophical one like the Cosmological Argument, the steady state theory or Hume?s infinite regress theory. Aquinas, this Christian theological medieval scholar also provided the basis of Catholicism and used Aristotelian views of causation to create the Cosmological Argument- the first three ways written about in his book. Aquinas looked for a cause in the sense of a causal agent exercising active power and he argues that what God causes is the existing of things in their natures. ...read more.

Aquinas came up with the analogy of the dominos to help explain the idea of movement, there must be a prime mover to push the first domino to start the chain of dominoes falling, its the same with causation there must have originally been a first mover to start the cause and effect chain going. Inductively leaping, Aquinas said that this is not infinite regress, it cannot go on forever there must be a First Mover and it must have a different form, or to be different in nature, this idea is very much platonic. Another analogy to help describe this inductive leap is the bread that the baker makes looks nothing like the baker in form or nature but are very much interlinked like the first mover to the efficient following causes. The effect is nothing like its cause but only its skills of the baker can be tasted in the bread. If we say God is omnipotent we can never be the ?baker? but we can gain some knowledge or skills from the baker. So the first cause cannot be caused so we say it is uncaused. Aquinas said it his book: ?Nor can the being of a thing continue after the action of the agent has ceased, if the agent ...read more.

This is hard for religious thinkers because having no purpose other than to reproduce isn?t self-fulfilling. Another theory is that the universe came to existence by chance, kind of supported by the big bang theory because it is unknown what started the chain of events that cause the bang. This also supports the idea of not having a purpose because the whole universe in theory could have been an accident. Bertrand Russell said that ?just because humans and mammals have a mother doesn?t mean that the universe has to have a mother? suggesting that an explanation isn?t really needed. Coppleston, a religious believer based his counter argument defending the cosmological argument saying that just because the God doesn?t have a justification doesn?t mean it doesn?t mean it doesn?t exist. Overall the kind of God that Aquinas leaves his audience with when he explains the existence of God cosmologically is the God of philosophers. The idea of God isn?t theistic or deistic which is a problem for Christians because they need to able to relate with to him and a God that just creates the universe and doesn?t care for people which the argument portrays is not something that anyone not only Christians can relate to. ...read more.