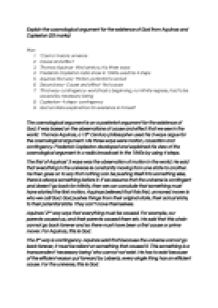 Transfer-Encoding: chunked ﻿Explain the cosmological argument for the existence of God from Aquinas and Copleston (25 marks) Plan 1. ?Cosmo? means universe 2. Cause and effect 3. Thomas Aquinas- third century, his three ways 4. Frederick Copleston radio show in 1940s used his 4 steps 5. Aquinas first way- Motion, potential to actual 6. Second way- Cause and effect- first cause 7. Third way- contingency- world had a beginning, no infinite regress, had to be caused by necessary being 8. Copleston- 4 steps- contingency 9. God contains explanation for existence in himself The cosmological argument is an a posteriori argument for the existence of God. ...read more.

He then goes on to say that nothing can be pushing itself into something else, there is always something before it. If we assume that the universe is contingent and doesn?t go back for infinity, then we can conclude that something must have started the first motion. Aquinas believed that this first, unmoved mover is who we call God. God pushes things from their original state, their actual state, to their potential state. They can?t move themselves. Aquinas? 2nd way says that everything must be caused. For example, our parents caused us, and their parents caused them etc. ...read more.

For the universe, this is God. Copleston put forward his idea of the cosmological argument in 4 main steps. Firstly, he says that things cannot exist of their own, they are brought about by other events. Secondly, he says that everything in the universe is like this, nothing holds its explanation in itself. Thirdly therefore, the universe cannot have been the cause of itself. Lastly, the cause of the universe must be some being which exists separately and holds its own explanation in itself. This necessary being is God. In conclusion, the cosmological argument tries to give proof of God?s existence by looking at causation and motion in the world. Aquinas and Copleston believed that there must be a first cause, and this is a necessary being who we call God. ...read more.