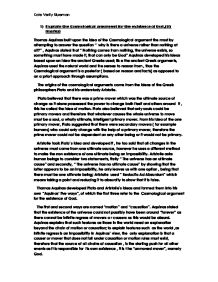 Explain the Cosmological argument for the existence of God.

1) Explain the Cosmological argument for the existence of God.(25 marks) Thomas Aquinas built upon the idea of the Cosmological argument the most by attempting to answer the question " why is there a universe rather than nothing at all?" , Aquinas stated that " Nothing comes from nothing, the universe exists, so something must have made it, that can only be God" Aquinas developed his ideas based upon an idea the ancient Greeks used; like the ancient Greek arguments, Aquinas used the natural world and the senses to reason from , thus the Cosmological argument is a posterior ( based on reason and facts) as opposed to an a priori approach through assumptions. The origins of the cosmological arguments come from the ideas of the Greek philosophers Plato and his understudy Aristotle. Plato believed that there was a prime mover which was the ultimate source of change as it alone possessed the power to change both itself and others around it , this he called the idea of motion. Plato also believed that only souls could be primary movers and therefore that whatever causes the whole universe to move must be a soul, a wholly ultimate, intelligent primary mover. ...read more.

The first and second ways are named "motion" and "causation". Aquinas stated that the existence of the universe could not possibly have been around "forever" as there cannot be infinite regress of movers or causers as this would be absurd. Aquinas explains that such features as those in the world need an explanation beyond the chain of motion or causation; to explain features such as the world ,as infinite regress is an impossibility in Aquinas' view, the only explanation is that a causer or mover that does not fall under causation or motion rules must exist, therefore that the source of all chains of causation , is the starting push for all other events as it is responsible for its own existence , it is the "unmoved mover", namely God. An example of Aquinas' first and second ways is wood burning on a fire. Wood is in a state of change as it burns; as wood is a secondary mover it cannot just ignite and burn itself, it needs fire. If everything was a secondary mover, then there would be an infinite regress of movers; if there was an infinite regress of movers ...read more.

in the world was contingent, there would be nothing; if there was nothing then there would be no life now, - this is an absurd point to comprehend as we are existing right now- , therefore not everything is contingent and one ultimate non-contingent being is necessary. From this point Aquinas makes it clear that there can only be one ultimate being as an infinite regress of necessary beings (multiple Gods) would mean that they would be contingent. To conclude , the Cosmological argument is one that shows Aquinas believed that the explanation for the universe cannot be found within it but must be located in an external source or cause (which must be God). The Cosmological arguments claims God is a being of necessary existence similarly to the Ontological arguments, the difference however lies in that the Cosmological conclusion of God's existence is based on our experiences of the universe; inductive reasoning is the basis of the Cosmological argument and suggests that we can proceed from what we know of the universe, conclusions about what lies beyond our own experiences using his first three ways. ?? ?? ?? ?? Kate Verity Blueman ...read more.