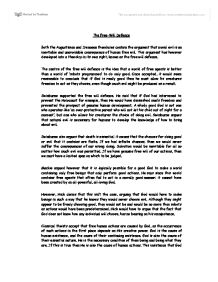 Explain the free will defence. Both the Augustinian and Irenaean theodicies contain the argument that moral evil is an inevitable and unavoidable consequence of human free will. This argument has however developed into a theodicy in its own right, known a

The Free-Will Defence Both the Augustinian and Irenaean theodicies contain the argument that moral evil is an inevitable and unavoidable consequence of human free will. This argument has however developed into a theodicy in its own right, known as the free will defence. The centre of the free will defence is the idea that a world of free agents is better than a world of 'robots programmed' to do only good. Once accepted, it would seem reasonable to conclude that if God is really good then he must allow his creatures freedom to act as they choose, even though much evil might be produced as a result. Swinburne supported the free will defence. He said that if God had intervened to prevent the Holocaust for example, then He would have diminished man's freedom and prevented the prospect of genuine human development. ...read more.

However, Hick claims that this isn't the case, arguing that God would have to make beings in such a way that he knows they would never choose evil. Although they might appear to be freely choosing good, they would not be and would be no more than robots as actions would have been predetermined. Hick would have to argue that the fact that God does not know how any individual will choose, has no bearing on his omnipotence. Classical theists accept that free human actions are caused by God, as the occurrence of such actions in the first place depends on His creative power. God is the cause of human existence, and the cause of their continuing existence. God is also the cause of their essential nature. He is the necessary condition of them being and being what they are. If this is true then He is also the cause of human actions. ...read more.

If this is correct, and God could have created a world with beings who always freely choose moral good, then there seems to be only one way to relieve God of responsibility for creating an evil which He need not have created. Basically, this is to resurrect the old 'Monist' argument that God cannot have created evil since evil is in fact nothing at all. With further relation to Augustinian Theodicy. It is not easy to identify what kind of reality is involved in there being human moral failure - we do not speak of there being human moral failures in the same way as we speak of there being cats, for example. We do not think of human moral failure as a substance of any sort, in which case it make no sense to say that it was created by God. To sum up, free will defence can be viewed as an attempt to show that there some kinds of good that even an all-good, all-powerful, all-knowing God can't bring about without permitting evil. ?? ?? ?? ?? ...read more.