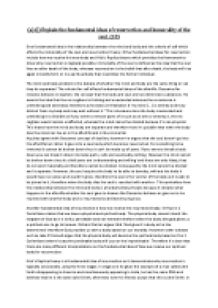 Explain the fundamental ideas of resurrection and immortality of the soul. (18)

Transfer-Encoding: chunked ﻿(a) (i) Explain the fundamental ideas of resurrection and Immorality of the soul. (18) One fundamental idea is the relationship between the mind and body and the criteria of self which affects the immorality of the soul and resurrection theory. Other fundamental ideas for resurrection include how we receive this new body and Hick?s Replica theory which provides the framework to show why resurrection is logically possible. Immorality of the soul is defined as the idea that the soul lives on after death of the body, whereas resurrection is the belief that after death, the body will rise again in bodily form or in a spiritual body that resembles the former individual. The mind and body problem is the debate of whether the mind and body are the same thing or can they be separated. The criteria for self effects fundamental ideas of the afterlife. Descartes for instance believes in dualism, the concept that the body and soul are two distinctive substances. He asserts the idea that the res cogitans is thinking and unextended whereas the res extensa is unthinking and extended; therefore as he states in Mediation 6 ?my mind (?) is entirely and truly distinct from my body and may exist without it.? This is because since the body is extended and unthinking it is divisible as if you were to remove parts of it such as an arm or destroy it, the res cogitans would remain unaffected, whereas the mind cannot be divided because it?s non-physical. ...read more.

Therefore this supports John Smith?s replica theory that fundamental ideas of resurrection include the resurrected person sharing their old characteristics and are physical beings, it also goes on to suggest that the resurrected person has physical and non-physical characteristics as Jesus was able to transport inside a house where all the entrances where closed but this could just be because Jesus is a special case and has not yet ascended to heaven so this may differ from what will happen to us in the afterlife; despite this it still remains a fundamental idea of resurrection. (ii) Discuss the view that arguments or evidence for belief in life after death are stronger than those against it. (12) Arguments and evidence for belief in life after death is not stronger than those against it as arguments as resurrection theories are merely hypothetical as is evidence for the immorality of the soul. However, this doesn?t make evidence and arguments against the belief in life after death any stronger as they only highlight how arguments for are weak, they do not disprove them. Therefore both arguments and evidence for and against belief in the afterlife are equally weak. Firstly, Hick?s Replica theory of resurrection may be viewed as a convincing argument for life after death as it sets out the framework for resurrection showing how it is logically conceivable for someone to appear in another word as a replica, thereby solving issues of resurrection such as how do those who have been cremated or died as a baby resurrect in their original body as it supports Richard Carrier?s argument that when we die God provides us with a new spiritual body. ...read more.

However Hick also argues that this just shows an ability of telepathy and indicates that there is life after death; it does not prove that there is actually life after death. Derren Brown would go further and argue that mediums are fakes, who use techniques such a cold reading to make complete strangers believe that you know a lot about them without any prior knowledge and therefore doesn?t? prove life beyond death at all for instance the technique of shot gunning where they state very general statements and then wait for the response of the ?subject? for instance: ?I sense a woman in your family with some sort of cancer.? Overall this shows how parapsychology is weak evidence in proving life after death; it simply indicates that it?s a possibility and cannot be proved or disproved. Therefore evidence for and evidence against life after death are both equally weak. Overall, arguments and evidence for belief in life after death is not stronger than those against it. Firstly, Hick?s Replica theory argument is merely a theory and doesn?t prove anything; it is simply hypothetical, as is evidence such as Jesus? resurrection or mediums as neither can be verified. However, this doesn?t make evidence and arguments against the belief in life after death any stronger as they only highlight how the arguments for life after death are weak, they do not disprove them. Therefore both arguments and evidence for and against belief in the afterlife are equally unsuccessful. ...read more.