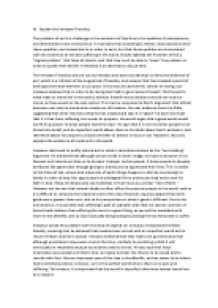 ﻿1. Explain the Irenaean Theodicy The problem of evil is a challenge to the existence of God due to his qualities of omnipotence, omnibenevolence and omniscience. It maintains that according to theists, God possesses all of these qualities, and indeed has to in order to exist, but that these qualities are inconsistent with the existence of evil and suffering in the world. Macke labelled the Problem of Evil a ?logical problem? that faces all theists, and that they must be able to ?solve? the problem in order to justify their beliefs. A theodicy is an attempt to do just that. The Irenaean Theodicy was set out by Irenaeus and does not attempt to deny the existence of evil, which is a criticism of the Augustinian Theodicy, and accepts that God created a world of both good and bad elements on purpose. ...read more.

He says that it is not moral for people to be forced into belief, and an imperfect world allows there to be doubt about God?s existence, and therefore allows for people to choose whether to believe in God or not. However, this only explains the existence of moral evil in the world. Irenaeus continued to justify natural evil in what is sometimes known as the ?soul-making? argument. He believed that although we are made in God?s image, we have to become in his likeness and natural evil help us to become stronger, better people. It helps people to develop attributes like generosity through giving to charity and to appreciate their lives. This is similar to the Story of Job, where God made lots of awful things happen to Job like murdering his family in order to help him appreciate the privileged life he previously lived and to test his faith in God. ...read more.

Irenaeus interpreted the Bible literally, meaning that he believed that mankind was cursed with an imperfect world as the result of Adam and Eve?s actions. Irenaeus believed that they had to be punished and that although punishment may seem cruel at the time, similarly to punishing a child it will eventually be rewarded because boundaries need to be set. He also saw that Jesus? incarnation was evidence of God?s love, as it gave humans the chance to be saved and to reunite with God. Also an important part of this idea is the afterlife, as that seems to be where God?s omnibenevolence is shown, as it is the perfect world where there is no pain and suffering. To Irenaeus, it is important that the world is imperfect otherwise heaven would not be a reward. ...read more.