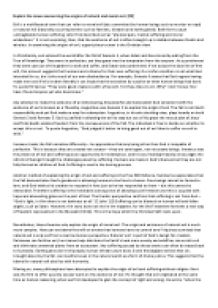 Explain the issues concerning the origins of natural and moral evil.

Transfer-Encoding: chunked ﻿Explain the issues concerning the origins of natural and moral evil. [35] Evil is a multifaceted term that can refer to moral evil (acts committed by human beings such as murder or rape) or natural evil (naturally occurring events such as famines, diseases and earthquakes). Both forms cause unimaginable human suffering. John Hick described evil as ?physical pain, mental suffering and moral wickedness.? It is not surprising, then, that the existence of evil is often brought up in debate between theists and atheists. In examining the origins of evil, a good place to start is the Christian view. In Christianity, evil entered the world after the fall of Genesis 3, when Adam and Eve sinned by eating from the Tree of Knowledge. They were in perfection, yet they gave into the temptation from the serpent. As a punishment they were cast out of the garden to work and suffer, and Satan was condemned. ...read more.

Irenaeus sees the presence of evil and suffering as an opportunity for redemption, and his soul making theodicy encourages the reform of beings through the challenges posed by suffering. Humans are made in God?s likeness but they are not fully formed as children of God. Suffering is used in the honing process. Another method of explaining the origin of evil and suffering is the Free Will Defence. Swinburne appreciates that the Fall demonstrates God?s goodness in allowing humans to be free to choose. Free beings cannot be forced to love, and God wishes his creation to respond in love just as he has responded to them ? but this cannot be demanded. Therefore suffering is the inevitable consequence of allowing such freedom and this is coupled with hope and abounding grace on the part of God. The theistic perspective confirms that suffering is not from God ? ?God is light, in Him there is not darkness at all.? (1 John 1:5) ...read more.

Nietzsche looked at the world and all its suffering and declared that there was no order. This led him to confirm that there was no God. Therefore, man is alone in a pointless universe and must make the best he can of this absurd reality. Suffering is the natural consequence of a random universe, a victim of the big bang and evolution which are disordered biological drives. Evil and suffering, as Russel put it bluntly, are ?a brute fact.? However, more commonly the atheistic view rests on the principles of humanism. They accept the reality of suffering but positively believe that it can be conquered by the human will and intellect. Ultimately, the question surrounding the origin of evil and suffering will never truly be solved with our fallible human understanding. To quote Joseph Conrad, "The belief in a supernatural source of evil is not necessary; men alone are quite capable of every wickedness.? ...read more.