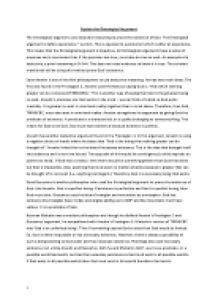 Explain the Ontological Argument + Kant's Argument has Finished all Arguments

Transfer-Encoding: chunked ﻿Explain the Ontological Argument The Ontological argument uses deductive reasoning to prove the existence of God. The Ontological argument is before experience ? a priori. This is opposed to a posteriori which is after an experience. This means that the Ontological argument is objective. All Ontological arguments have a series of premises and a conclusion that, if the premises are true, must also be true as well. An example of a deductive, a priori reasoning is 2+2=4. This does not need evidence to know it is true. The scholars mentioned will be using this method prove God?s existence. Saint Anselm is one of the first philosophers to use deductive reasoning. He had two main ideas. The first was found in the Proslogion 2. Anselm used the famous saying God is, ?that which nothing greater can be conceived (TWNGCBC).? This is another way of saying that God is the greatest being to exist. Anselm?s premises are: God exists in the mind ? we can think of a God so God exists mentally. It is greater to exist in mind and reality together than in mind alone. ...read more.

Plantinga also used necessary existence, but unlike Anselm and Descartes, both he and Malcolm didn?t use it as a predicate. In a possible world God exists, but God has necessary existence so God must exist in all possible worlds. If God exists in all possible worlds then God must exist in this world therefore God exists. Kant?s Argument Has Finished All Ontological Arguments Kant?s objection to the Ontological argument can be seen by some to have finished the Ontological argument and it can be seen as irrelevant to others. Immanuel Kant is a theist philosopher who is well known for criticising many different arguments for the existence of God. Kant disliked both Anselm?s and Descartes? Ontological argument. To Kant existence is not a predicate ? which was the key argument in Proslogion 2 and Descartes? argument. Kant used the example of thalers (currency in Europe during the 1800s when Kant was alive) to prove his point. Kant said that if you add existence to a list of other predicates no one would think any differently about thalers. Since nothing in our minds change when we use existence as a predicate, existence cannot be a predicate. ...read more.