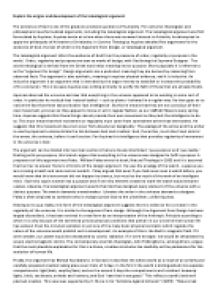 Explain the origins and development of the teleological argument

He suggests that this movement does not occur ?fortuitously but designedly?. The analogy of the arrow and the archer is used by Aquinas to demonstrate the link between God and creation: God, the archer, must direct and control the arrow, the universe, before it can function. For Aquinas this intelligence that provides regularity of movement in the universe is God. The argument can be divided into two main sections that are closely interlinked: ?qua purpose? and ?qua reality.? Starting with qua purpose, this branch argues that everything in the universe was designed to fulfil a purpose. A proponent of this argument was Paley. William Paley wrote his book, Natural Theology in 1802 and it is assumed that he tries to answer Hume's criticisms of the design argument. He uses the analogy of the watch - suppose you are crossing a heath and come across a watch. Paley argued that even if you had never seen a watch before, you would know that this instrument did not happen by chance, but must be the result of the work of an intelligent mind. ...read more.

An example of this is the Earth?s magnetic field. If it were weaker, our planet would be devastated by cosmic radiation. If it were stronger, we would be devastated by severe electromagnetic storms. The contemporary scientist-theologian, John Polkinghorne, among others, argues that the most plausible explanation for this is a divine, creative mind who has carefully set the parameters for the evolution of human life. Finally, the argument has Biblical foundations: in Genesis it describes the whole world as a result of an orderly and carefully prepared creation taking place over 2 lots of 3 days. In the first 3 the world is distinguished into separate compartments: light/dark, sea/sky/land, and on the second 3 days the compartments are furnished: heavenly lights, birds, sea beasts, animals and humans; and God ?saw that it was good.? This reflects a careful and well planned creation. This view was supported by H. More in his ?Antidote Against Atheism? (1659): ?Nature had made the hindermost parts of our body which we sit upon most fleshy, as providing for out ease, and making us a natural cushion.? ...read more.