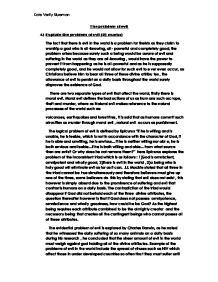 The problem of evil A) Explain the problem of evil (25 marks) The fact that there is evil in the world is a problem for theists as they claim to worship a god who is all-knowing, all- powerful and completely good, the problem arises because surely such a being would be aware of evil and suffering in the world as they are all-knowing , would have the power to prevent it from happening as he is all-powerful and as he is supposedly completely good ,and he would not allow for such evil to ever even occur, as Christians believe him to bear all three of these divine attributes , the allowance of evil to persist on a daily basis throughout the world surely disproves the existence of God. There are two separate types of evil that affect the world, firstly there is moral evil. Moral evil defines the bad actions of us as humans such as: rape, theft and murder, where as Natural evil makes reference to the natural processes of the world such as: volcanoes, earthquakes and forest fires, it is said that as humans commit such atrocities as murder through moral evil , natural evil occurs as punishment. ...read more.

the fawn endures is pointless , yet it is nature , surely a wholly good God would end this suffering quickly as it is pointless. To conclude, the problem of evil lies in that devoted theists such as Christians and Muslims believe in a God who possesses all of the divine attributes and yet suffering is so prominent , they believe in such a God regardless of what evil may strike them in their lifetimes yet surely their God would protect the devotee from having to experience such pain. The problem of evil however is only a challenge for the religious, for atheists this is not an issue as they do not believe in a God who should be responsible for it, the existence of evil is the biggest destroyer of the belief in God. B) Are the theodicies' attempts to deal with moral and natural evil and suffering doomed, in the face of so much evil and suffering? Each of the theodicies oppose atheism and attempt to prove that God holds all of the divine attributes he supposedly has , regardless of the evil in the world. Firstly is Augustine's theodicy. ...read more.

A criticism to Leibniz's theodicy comes from Voltaire, a French writer. Voltaire published a novel named 'Candide' , in the novel a character named Dr Pangloss regularly announces that this is the best world possible, eventually Candid witnesses the hanging of Dr Pangloss and states " If this is the best possible world, what can the others be like?" , Voltaire contrasts the horrific pain and suffering in the world against Leibniz's theodicy. To conclude, the theodicies' attempts to deal with moral and natural evil in the face of so much evil and suffering are doomed, as each of the criticisms against them bring into question how a God who holds each of the divine attributes can justify such suffering in the world as a means to an end in the next life. In my opinions , the existence of Hell alone blows the theistic ideal of a God out of the water as it simply connotes that some humans will have to experience large amounts of pain infinitely to God's approval, thus God cannot justify suffering in this life as he has the power to inflict it on mortals forever should they rebel against the system in their life previous to the afterlife. ?? ?? ?? ?? Kate Verity Blueman ...read more.