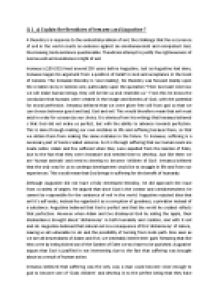 ) Explain the theodicies of Irenaeus and Augustine ?

﻿Q 1_a) Explain the theodicies of Irenaeus and Augustine ? A theodicy is a response to the evidential problem of evil, the challenge that the occurrence of evil in the world counts as evidence against an omnibenevolent and omnipotent God, thus leaving Gods existence questionable. Theodicies attempt to justify the righteousness of God as well as his existence in light of evil. Irenaeus (c130-202) lived around 200 years before Augustine. Just as Augustine had done, Irenaeus began his argument from a position of belief in God and acceptance in the book of Genesis. The Irenaean theodicy is 'soul making', his theodicy was focused mainly upon the creation story in Genesis one, particularly upon the quotation ?Then God said: And now we will make human beings, they will be like us and resemble us.? From this he draws the conclusion that humans were created in the image and likeness of God, with the potential for moral perfection. Irenaeus believed that we were given free will from god so that we can choose between good and bad, God and evil. ...read more.

He argued that since God is the creator and omnibenevolent, he cannot be responsible for the existence of evil in the world. Augustine rejected idea that evil it?s self exists, instead he regarded it as a corruption of goodness, a privation instead of a substance. Augustine believed that God is perfect and that the world he created reflects that perfection. However when Adam and Eve disobeyed God by eating the apple, their disobedience brought about ?disharmony? in both humanity and creation, and with it evil and sin. Augustine believed that natural evil is a consequence of this ?disharmony? of nature, leaving us all vulnerable to sin and the possibility of turning from Gods path. Also seen as we are all descendants of Adam and Eve, we inevitably inherit their guilt. Meaning that like they were by being kicked out of the Garden of Eden we too have to be punished. Augustine argues that God is justified in not intervening due to the fact that suffering was brought about as a result of human action. ...read more.

to a certain religious group or for simply being attracted to the same gender, it is obvious to state that none of them gained anything which would make them ?better people?. However they did go through unimaginable pain and agony through the torture and hard treatment they received before they were killed in inhumane ways, which would be more than enough to make anyone miserable regardless of whether or not they gain anything from the experience. In conclusion it is clear to state that in some sense suffering can be beneficial as it is through the mistakes which we learn from the incident that makes us better people, the greater the suffering the more likely we are to remember the consequence of our actions and obtain from repeating them. As well as this with reference to innocent suffering such as those who died within the holocaust and various other horrific events in history, Irenaeus believed that how much our souls develop is based on how loyal we remain to God through these times. It is from this that we will be judged and rewarded for after death. ...read more.