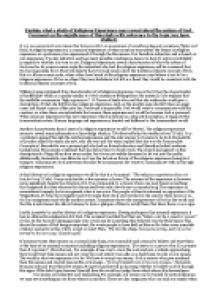 Explain what a study of Religious Experience may reveal about the nature of God. Comment on the significance of this study with reference to the topic you have studied.

Similarly, two people who are listening to the exact same music or eating the exact same food may have a different response. Bernadette was the only one who could see the Virgin Mary in the grotto, those who followed her could not see anything; it looked like Bernadette was talking to herself. Sir Alister Hardy set up the Religious Experience Research Unit (RERU) in Oxford. He carried out an anonymous survey which surveyed the people regarding whether they had a religious experience or not. He received a surprising percentage of 25-45% who said that they had a religious experience. As it was anonymous with no incentives. At the Toronto blessings, people were feeling the Holy Spirit personally and spoke in tongues, people claimed to feel His transcendent nature, and His omnipotence allowed them to speak in tongues. In the book of Exodus it says ?the Lord use to speak to Moses face to face, as a man speaks to his friend?. According to the traditional theistic concepts of God, He is personal and immanent, He can relate to people personally depending on their needs and is omniscient. He knows when someone?s faith is low in them so He provides them with a religious experience so they can see hope. He conferred with the Abraham, according to the bible with regards to destroying Sodom and Gomorra because of the sinful people it contained. ...read more.

They could have been ?influenced by psychological and social pressures? (Davies) In conclusion, religious experiences do not really portray the nature of God fully; religious experiences open doors for many other possible conclusions. ?The claim to experience God is problematic?(Davies). The problem of evil and suffering pose a problem in some traditional theistic beliefs of God?s nature. Bernadette having her apparition would be a sign of God?s benevolence to her and her family, but many people are in worse conditions but yet they did not get an apparition so it contradicts the reality of His benevolence. It can be argued however that if God allowed everyone to have a religious experience then there would be no reason for Him to be testing humans. It would be more of a test at a macrocosmic level where someone uses their freewill to believe in His signs and as a proof of His nature. The flaw for this is that many people are experiencing poverty and are suffering but they do not receive nor hear of religious experiences, this makes God?s omniscience, for some debatable. Davies says that some people report of the absence of God rather than His presence which contradicts the claim that God is omniscient and immanent. The respondents of Sir Alistair?s research did not specify whether their religious experience was positive or negative in relation to God?s nature, their interpretations of a religious experience is also unknown. ...read more.