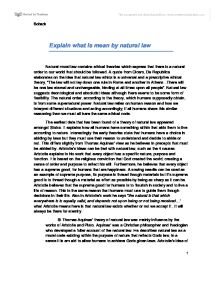 Explain What Is Meant By natural law

Explain what is mean by natural law

Natural moral law contains ethical theories which express that there is a natural order to our world that should be followed. A quote from Cicero, De Republica elaborates on the idea that natural law ethics is a universal and a prescriptive ethical theory, “The law will not lay down one rule in Rome and another in Athens...There will be one law eternal and unchangeable, binding at all times upon all people”. Natural law suggests deontological and absolutist ideas although there seems to be some form of flexibility. The natural order, according to the theory, which humans supposedly obtain, is from some supernatural power. Natural law relies on human reason and how we interpret different situations and acting accordingly; if all humans share this similar reasoning then we must all bare the same ethical code.

The earliest date that has been found of a theory of natural law appeared amongst Stoics. It explains how all humans have something within that aids them to live according to nature. Interestingly the early theories state that humans have a choice in abiding by laws but they must use their reason to understand and decide to abide or not. This differs slightly from Thomas Aquinas’ view as he believes in precepts that must be abided by. Aristotle’s ideas can be tied with natural law, such as the 4 causes. Aristotle explains in his work that every object has a specific nature, purpose and function. It is based on the religious conviction that God created the world, creating a sense of order and purpose to reflect his will. Furthermore, he believes that every object has a supreme good, for humans that are happiness. A sowing needle can be used as an example of supreme purpose, its purpose is thread though materials but it’s supreme good is to thread though a material as effort as possible by being as sharp as it can be. Aristotle believes that the supreme good for humans is to flourish in society and to live a life of reason. This is the same reason that humans must use to guide them though decisions in their life. Also in Aristotle’s work he says “the natural is that which everywhere is is equally valid, and depends not upon being or not being received…’   what Aristotle means here is that natural law exists whether or not we accept it , it will always be there for eternity.

St Thomas Aquinas’ theory of natural law was mainly influence by the works of Aristotle and Plato. Aquinas’ was a Christian philosopher and theologian who developed a fuller account of the natural law. He describes natural law as a moral code existing within the purpose of nature that reflects Gods law, in a sense it is am aid to allow humans to achieve Gods given laws. Aristotle’s idea of purpose may have influenced him to expand on the idea. Aquinas’ theory of natural law differs from ‘divine command theory’ as Natural law is more accessible to all and it relies on reason. Furthermore Aquinas’ theory evaluates both acts and attitude as it allows humans to glorify God an express what a good God is.

Like Aristotle, Aquinas explains how humans aim for a purpose but unlike Aristotle who believes this is happiness, he believes all humans are ‘made in the image of God’. Therefore the supreme good must be the development of this image of God, which is perfection. This perfection, according to Aquinas was not possible to be achieved in this life but only in the next life and the purpose of morality is to allow us to fulfill our desires. A fundamental part of his theory Is to achieve as much good as possible and avoiding evil. He believes this because we were created for one purpose and that is perfection .Aquinas believed that there was no such thing as evil as we are all made in the image of God, therefore it is logical for Aquinas to say humans do not carry out evil but apparent goods. For example if a person commits adultery he or she believes that it is good , although this is an error of reason they have apparently done the right thing according to them. Aquinas’ theory of natural law greatly stresses the fact that our nature is knowable and we need to use our reason to know it and understand it.

The secondary precepts are more flexible and realistic; they are a specific application of primary precepts, such as; do not murder and defend the defenseless. Such examples do not need working out the moral code as they take into account our human limitations and weaknesses, therefore they are presented as relatively straight forward.

In my opinion there is no ethical theory that pleases everyone, there is bound to one or more flaws. Such theories that have been worked on very many years ago prove hard to search for answers concerning our modern world.

Natural law finds it exceedingly challenging to relate to complex decisions to basic principles, for example ; should more money be spent helping charities or on hospitals. It leaves one stuck between two options. Abortion would be considered against the natural ethic code. Having an abortion is stopping life and limiting reproduction, against ‘many and multiply’. But putting abortion in the context of saving a life shows a different perspective. If the mother was in a situation where she would not be able to supporting a child, surely that would benefit instead create life that would suffer. Another topic that is disputable is contraception. Similarly with contraception it is prohibiting new life but then again it can be for the greater good. For example protected sex prevents sexually transmitted diseases. Furthermore a weakness to natural moral law according to Aquinas’ is that it assumes everyone carries out good acts, I find this slightly deluded and optimistic. I find hard to believe that acts such as rape an apparent good, surely one who carries out such an action knows that this is wrong; some people may want to be perceived as evil for unknown reasons. Different societies have different natural values therefore it is hard accepting one universal law.

Among the weaknesses, there are several strengths to natural law. It does give a concise, clear-cut approach to morality and establishing common rules which day to day topics can be related to. It has a fairly positive approach by mainly concentrating on the potential goodness than the wrong. Furthermore Natural law concentrates on the character of humans and there potential for goodness rather than the right or wrong decisions on certain acts, it attempts to bring the best out of a situation, it proves to allow some degree of flexibility. It also emphasizes the fulfillment of our natures, all the things we require for happiness – health, friends, the purpose of our existence and morality.

Some aspects of natural law I believe to be unjust, such as abortion for the greater good. It seems to be a very optimistic ethical view, which seeks only the good in humans, but in a sense it seems to shun bad as a whole which In my opinion is unjust.