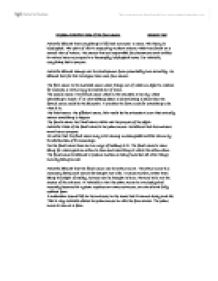 Aristotle believed that everything in life had a purpose- a cause. His theory is teleological. His point of view is argued by modern science which has forced on a casual view of nature. The causes that are responsible for phenomena and entities in nature have no purpose in a thoroughly teleological sense. For Aristotle, everything had a purpose.

Aristotle believed change was the development from potentiality into actuality. He believed that for this to happen there were four causes:

The first cause: is the material cause where things out of which an object is created, for example, a statue may be created out of stone.

The second cause: The formal cause which is the principle or law by which something is made. If we were talking about a constructing a house then the formal cause could be the blueprint. It provides the form used for something to be what it is.

The third cause: The efficient cause, this would be the antecedent even that actually causes something to happen.

The fourth cause: the Final cause which was the purpose of the object.

Aristotle’s idea of the final cause is the prime mover. He believes that the universe must have a purpose.

He writes that the final cause may exist among unchangeable entities shown by the distinction of its meanings.

For the final cause there are two ways of looking at it. The final cause is some being for whose good an action is done and something at which the action aims.

The final cause is believed to produce motion as being loved but all other things move by being moved.

Aristotle believed that the final cause was the prime mover. The prime mover is a necessary being and cannot be thought not to be. It causes motion, rather than being the origin of reality, however can be thought to be so. However he is not the creator of the universe. In Aristotle’s view the prime mover is a metaphysical necessity because his system requires an unmoved mover, an actual and fully realised form.

It maintains eternal life in the universe, in the sense that it cannot decay and die.

B) “Aristotle’s theory of four causes is not convincing” discuss.

Aristotle developed his ideas to suggest that the “common source” is an eternal substance, which exists necessarily and is immune to change.

Also the whole world is not subject to these things; time cannot decay and will not die.

However time can only be so if there is something in it that is not subject to change, decay and death.

Therefore there must be and eternal substance that is not subject to change, decay and death.

Therefore it can be said that it covers every eventuality- it relates to everything.

It could also be asked what happens if the entity of the house is changed into something like a post office, or a bus shelter, then what is its purpose then?

And is it right that there is only one purpose?

And Aristotle would say that yes there is only one purpose for everything. However we know that most things have more than one purpose. For example a cow produces milk for us, however we also use the cow for meat.

However the material may not be an actual cause as it can be seen as if Aristotle is trying to force it in with causality. As cause implies action which get you the result.

The only one that could be applied to cause is most likely to be efficient cause because there is a reason for constructing that object in this case a house.

The formal cause may relate to Plato’s idea of the forms.

His theory was that there was a different realm to the one we are in and that we are just copies of the forms in the other realm.

Aristotle ahs a teleological view of nature, meaning that everything is working towards suns end.  Today we tend to go for the causal view not the teleological.

His theory can be proven wrong again because today in science we have proven that there are some bacteria and other organisms that exist but do not actually have a purpose for existing.

Also, for example, what is the purpose of the appendix?

It might have had a purpose a long time ago but today it is just not needed.