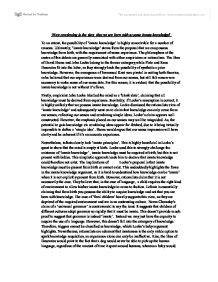 How convincing is the view that we are born with at some innate knowledge?

'How convincing is the view that we are born with at some innate knowledge? To an extent, the possibility of 'innate knowledge' is highly conceivable for a number of reasons. Ultimately, 'innate knowledge' stems from the proposal that we can possess knowledge from birth, with the requirement of sense experience. The philosophers at the centre of this debate are generally associated with either empiricism or rationalism. The likes of David Hume and John Locke belong to the former catergory,while Plato and Rene Descartes fit into the latter, as they strongly back the possibility of synthetic a prior knowledge. However, the emergence of Immanuel Kant was pivotal in uniting both theories, as he believed that our experiences were derived from our senses, but still felt reason was necessary to make sense of our sense data. For this reason, it is evident, that the possibility of innate knowledge is not without it's flaws. Firstly, empiricist John Locke labelled the mind as a 'blank slate', claiming that all knowledge must be derived from experience. Inevitably, if Locke's assumption is correct, it is highly unlikely that we possess innate knowledge. ...read more.

This doesn't provide much proof to suggest that grammar is indeed 'innate'. Instead we may just have the capacity to acquire the use of a language. However, this doesn't fall into the catergory of knowledge. Therefore, triggers cannot be classified as knowledge, which Locke's baby argument highlights. Nevertheless, rationalists are adamant that innateness is the only viable option to spark knowledge acquisition, as experience alone can only be ineffective. Also, the likes of Descartes would point to the fact that a dog would never be able to pick up the human language, regardless of the amount of time it spent around humans, whereas a baby would. This is a vital point, but the likes of Locke would suggest that we may just be wired differently, and have different attributes, but this does not then mean that 'innate knowledge' must exist. In addition, the presence of propositional knowledge without sufficient sense experience is problematic for the likes of Hume and Locke. The existence of God is often described as 'innate' despite a lack of empirical evidence. Descartes claims that knowledge of God's existence is innate and present within everyone. ...read more.

The inability to explain why infants lack innate principles suggests that we do infact possess a blank slate at birth. This suggests 'innate knowledge' may simply be a 'myth' because by definition it should be present at birth and if it is not, then it cannot exist. Also, the universal grammar debate proposal is disputable, as this appears to be know-how, rather than propositional. Therefore, it is only fair to assume, that there is a possibility of innate knowledge. However, the likelihood of this will vary depending on whether or not the rationalists or empiricists provide the most compelling argument to the perceiver. But which do you find convincing? Answer the question specifically. Junaid O'Balogun There are some good aspects to this essay, it is fluent, answ.rs the question. I think there were a few places that could have received a little more detail such as Descartes argument for God. And it would have been good to see maybe one more argument - maybe from Plato or Kant. But good answer. I did feel that your conclusion could have been more specific to the question whereby you could argue which account you felt was more convincing. Good effort. AO1 = 2, AO2 = 14, AO3 = 6 ...read more.