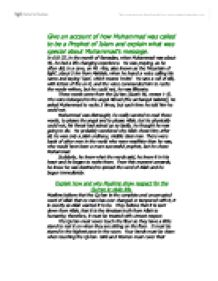 Give an account of how Muhammad was called to be a Prophet of Islam and explain what was special about Muhammad's message.

Give an account of how Muhammad was called to be a Prophet of Islam and explain what was special about Muhammad's message. In 610 CE, in the month of Ramadan, when Muhammad was about 40, he had a life changing experience. He was praying, as he often did, in a cave, on Mt. Hira, also known as the 'Mountain of light', about 5 km from Makkah, when he heard a voice calling his name and saying 'Iqra', which means 'recite'. He saw a roll of silk, with letters of fire on it, and the voice commanded him to recite the words written, but he could not, he was illiterate. These words came from the Qu'ran (Surah 96, verses 1-5). ...read more.

Suddenly, he knew what the words said, he knew it in his heart and he began to recite them. From this moment onwards, he knew he was destined to spread the word of Allah and he begun immediately. Explain how and why Muslims show respect for the Qu'ran in daily life. Muslims believe that the Qu'ran is the complete and uncorrupted word of Allah that no man has ever changed or tampered with it, it is exactly as Allah wanted it to be. They believe that it is sent down from Allah, that it is the timeless truth from Allah to humanity; therefore, it must be treated with utmost respect. The Qu'ran must never touch the floor so they have a little stand to rest it on when they are sitting on the floor. ...read more.

Without the Qu'ran, how would the people know that Muhammad was not making everything up? They would have to have some conformation that what Muhammad said was the truth; they had to have the truth from god. Also with no holy book, there would be nothing to base your faith upon, if you could not read and learn the scriptures in an uncorrupted form, then the only other way is by word of mouth, which is like a game of Chinese whispers, it is open to interpretation and can be changed, and then disputes will arise as to who is right and what the true word of Allah is. Every faith has a holy book, the Christians have the Bible, Judaism has the Torah, and Islam has the Qu'ran. These are the three most widespread religions, and they all rely on their holy book to survive. ...read more.