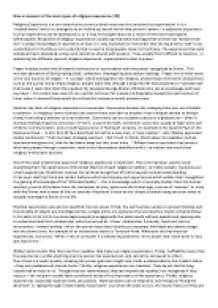 Give an account of the main types of religious experience.

Transfer-Encoding: chunked ﻿Give an account of the main types of religious experience. [35] Religious Experience is a non-empirical occurrence which may even be perceived as supernatural. It is a ?mental-event? which is undergone by an individual, and of which that person is aware ? a subjective experience. Such an experience can be spontaneous, or it may be brought about as a result of intensive training and self-discipline. Recipients of religious experiences usually say that what has happened to them has ?drawn them into? a deeper knowledge or awareness of God. It is very important to remember that the experience itself is not a substitute for the Divine, but a vehicle that is used to bring people closer to the Divine. The experience that each individual has is absolutely unique and cannot be shared with anyone ? they usually find it difficult to describe. In examining the different types of religious experience, a good place to start is prayer. ...read more.

I felt I trust in Christ, Christ alone, for salvation; and an assurance was given me, that He had taken away my sins, even mine..." William James concludes that persons who have passed through conversion, tend to feel themselves identified with it, no matter how much their religious enthusiasm declines. One of the least understood aspects of religious experience is mysticism. This term has been used to cover everything from the experiences of the Great Mystics of each religious tradition, to mildly ecstatic, mysterious or occult experiences. Mysticism involves the spiritual recognition of truths beyond normal understanding. It has been said that there are certain features which accompany such experiences which enable their recognition: the gaining of knowledge of the ?Ultimate Reality? ? this is knowledge which is normally hidden from the human intellect; a sense of freedom from the limitations of time, space and the human ego; a sense of ?oneness? or unity with the Divine and a sense of bliss or serenity. ...read more.

Finally, religious experiences, especially mystical kinds, are passive. Mystical states can be helped by such things as ?fixing the attention? or ?going through certain bodily movements?, but when the state occurs, the mystic feels as if they are taken over by a superior power. This can result in a phenomena that suggests alternative personality states, such as prophetic speech, speaking in tongues. The scholar Rudolf Otto wrote about numinosity in religious experience. This is when the person feels as if they are in the presence of an awesome power and yet they feel distinctly separate from it. However, some theologians are unhappy about such a concept being used to refer to the experience of God since it makes religion impersonal. Overall, religious experience is central to any religion and has been the basis of the establishing of many major religions, such as Christianity and Islam. It has a purpose of affirming God?s existence and engendering belief. To quote Joseph Barbera, ?I'm anything but immune to the power and the majesty of the religious experience.? ...read more.