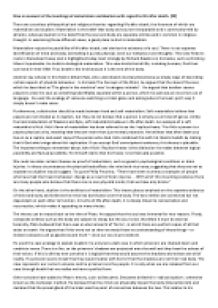 Give an account of the teachings of materialism and dualism with regard to life after death.

Transfer-Encoding: chunked ﻿Give an account of the teachings of materialism and dualism with regard to life after death. [35] There are countless philosophical and religious theories regarding life after death, the foremost of which are materialism and dualism. Materialism is the belief that body and soul are inseparable and is commonly held by atheists, whereas dualism is the belief that the soul and body are separate entities and is common in religious thought. In examining these different views, a good place to start is materialism. Materialism rejects the possibility of life after death, and denies the existence of a soul. There is not separate identification of mind and body; everything is purely physical, even our behaviour and thoughts. This view finds its roots in Darwinian theory and is highlighted today most strongly by Richard Dawkins in his books, such as Climbing Mount Improbable. He holds to biological materialism. This view holds that all life, including humans, find their sum total in their DNA. Thus death is the end because it is the end of the body. Another key scholar in this field is Gilbert Ryle, who understands mental phenomena as simply ways of describing certain aspects of physical behaviour. ...read more.

brain injuries ? With all of this mounting evidence there are many people who believe that there are no non-physical minds, that we have only brains.? On the other hand, dualism is the antithesis of materialism. This theory places emphasis on the separate existence of mind and body and believes the mind has dominance over the body. The two entities are connected but not dependant on each other to function. In terms of life after death, it is closely linked to reincarnation and resurrection, which makes it appealing to many theists. The theory can be traced back to the time of Plato. He argued that the soul was immortal for two reasons. Firstly, composite entities such as the body are subject to decay but the soul is not, therefore it must be eternal. Secondly, Plato believed that there was an eternal world of ?forms?, in which there are perfect copies of all that exists on earth. He argues that if this were not so then we would have no understanding of these things ? or indeed concepts such as goodness and truth ? since our soul is pre-existent. ...read more.

As for Leibniz, he argued the so-called Leibniz Gap. He believed in a pre-established harmony between body and soul, meaning that there is only a non-causal relationship of harmony between the two. Leibniz once wrote, ?I personally hold that a certain temporal punishment after this life is rather reasonable and probable.? This suggests he supported the Catholic doctrine of purgatory after death. Dualism is central to many religions, especially Christianity. The Bible clearly teaches that the soul and body are separate, for in Ecclesiastes 12:7 we read, ?the dust will return to the earth as it was and the spirit will return to God who gave it." Eastern religions such as Hinduism and Buddhism also support the idea of dualism through reincarnation, the idea that the soul moves on to the next life and inhabits a new body depending on the level of Karma developed and the nature of the Karma. There is some evidence for dualism, such as out of body experiences and psychic experiences. For example, researchers from the University of Southampton discovered that consciousness and the mind may continue to exist after the brain has ceased to function and the body is clinically dead. This suggests a separation of body and mind. Overall, any theory on life after death can never be decisively proven. ...read more.