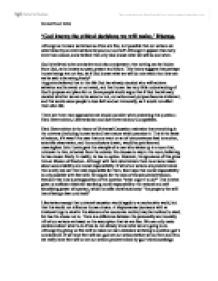 God Knows the ethical decisions we will make. Discuss

'God knows the ethical decisions we will make.' Discuss. Although as humans we behave as if we are free, is it possible that our actions are determined by an external force beyond our control? Although it appears that every event has a cause, some believe that only God knows what we will do and when. God is believed to be omniscient and also omnipresent; that nothing can be hidden from God, as he knows our past, present and future. This theory suggests that perhaps human beings are not free, as if God knows what we will do next week then how can we be said to be acting freely? Augustine believed that in this life God has already decided who will achieve salvation and be saved or not saved, and that human has very little understanding of God's purpose and plans for us. Some people would argue that if God had already decided whether we are to be saved or not, our actions and purpose become irrelevant, and this would cause people to lose faith and act immorally, as it would not affect their after-life. ...read more.

Kant says that moral responsibility is only possible with free will. He argued for the idea of transcendental freedom, freedom that is as a presupposition of the question "what ought I to do?" This is what gives us sufficient basis for ascribing moral responsibility: the rational and self-actualising power of a person, which he calls moral autonomy: "the property the will has of being a law unto itself." Libertarians accept that universal causation would apply to a mechanistic world, but that this would not influence human choice. A kleptomaniac (someone with an irrational urge to steal in the absence of an economic motive) may be inclined to steal, but has the choice not to. There is a difference between the personality and morality. All of our actions are based on the assumption that we are free. We can only make decisions about what to do if we do not already know what we are going to do. ...read more.

Having discussed the three main conflicting theories of determinism and free will, we can see that there is not truth on either end of the line. As stated earlier in the paper, "it is not either black or white." The truth can be found in the soft determinism, as it identifies with reality the most. Throughout history, people have always sought freedom, and hard determinism meanly deprives people their ability to act freely and follow internal call of will. The natural response is obvious. Libertarians on the other hand, claim that people are god-like, omnipotent beings, who are completely free in their choice, but at the same time they cannot explain the causes of a particular decision. Surely, free will is compatible with determinism, and the act of writing this paper is a perfect example. The desire to express my thoughts and to pass the course harmoniously coexist with the necessity to complete the assignment given by the professor. If not, then are people truly that free? Or, is there really a common determinant in the universe? Why then there is no order in universe and in molecules? ?? ?? ?? ?? Daniel Flood TM06 ...read more.