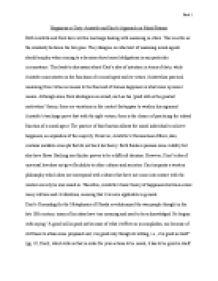 Happiness or Duty: Aristotle and Kants Approach on Moral Reason

﻿Ford Happiness or Duty: Aristotle and Kant?s Approach on Moral Reason Both Aristotle and Kant have written teachings dealing with reasoning in ethics. This is as far as the similarity between the two goes. They disagree on what sort of reasoning moral agents should employ when coming to a decision about moral obligations in any particular circumstance. This leads to discussion about Kant?s idea of intention in terms of duty, while Aristotle concentrates on the functions of a moral agent and its virtues. Aristotelian practical reasoning from virtues as means to the final end of human happiness is what sums up moral reason. Although some Kant ideologies are sound, such as his ?good will as the greatest motivation? theory, there are variations in the context that appear to weaken his argument. Aristotle?s teachings prove that with the right virtues, there is the chance of practicing the related function of a moral agent. The practice of this function allows the moral individual to achieve happiness, an aspiration of the majority. However, Aristotle?s Nicomachean Ethics, also, contains unstable concepts that do not back his theory. Both thinkers possess some validity but also have flaws. Backing one thinker proves to be a difficult decision. ...read more.

It is true that people help others for a sense of duty, but there is definitely some personal satisfaction involved with doing good deeds. This is where Kant?s ideas are flawed; in this common society where the majority of the population live in, people find it hard to understand the idea of helping inferior persons as a duty. In this westernized text, it implies that human beings do not understand the idea of ?working because it is what they love to do?. Aristotle?s Nicomachean Ethics will allow us to distinguish the different thought processes of the two thinkers and show how Aristotle?s theory can be spread across other cultures. Aristotle is one of the key ancient Greek philosophers that allowed other thinkers, such as Kant, to establish his own ideas. Aristotle emphasized happiness and the function of a moral agent. He begins by saying that the end good of moral agents is happiness. Happiness is the main aspiration of the majority of the world, so this certainly makes sense. Personally, the idea that there are two types of virtues, intellectual and moral, is also an interesting thought. Intellectual virtue is only learned by instruction. However, more importantly, moral virtue is enhanced by practice, and it is these virtues that determine to what extent humans are moral. ...read more.

Determining which philosopher has the strongest argument was a difficult decision. The particular flaw in Kant?s thesis, that tipped the scale toward Aristotle, was the idea of ?good as a duty?. A ?good will? has to be generated in a moral agent?s mind before being classed as a ?good will?. A human has choices; to do ?good?, and to do ?bad?. If good was a duty then there is no choice in that. Ultimately, a good will has to be a choice by moral man. As previously mentioned, the two extremely contrasting ideas are most certainly due to the huge gap in time of when both texts were written. Kant was educated in 18th century Europe, where ?duty? was at the forefront of the social attitudes. In a developing civilization, people worked because they had to work, not because they enjoyed it. This is where Kant?s sense of ?duty? was born. In comparison, the ancient Greek social structure did not have such extensive industrial developments. This allowed great thinkers, such as Aristotle, to focus on pure ethics in the sense that the social surroundings had less of an effect on people?s thoughts. Essentially, Kant?s idea of ?duty? is specific to a certain way of life, where Aristotle?s theory on happiness and function can be applied globally, regardless of race, culture, age or gender. ...read more.