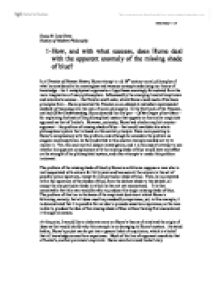 How, and with what success, does Hume deal with the apparent anomaly of the missing shade of blue?

Essay #1 Lent-Term History of Modern Philosophy 1- How, and with what success, does Hume deal with the apparent anomaly of the missing shade of blue? In A Treatise of Human Nature, Hume attempt to rid 18th century moral philosophy of what he considered to be meaningless and vacuous concepts underlying our theory of knowledge - be it metaphysical arguments or hypotheses seemingly formulated from the mere imagination of many philosophers. Influenced by the emerging trend of empiricism and naturalistic science - like Newton and Locke, which Hume owed much of his basic principles from - Hume presented the Treatise as an attempt to introduce experimental methods of reasoning into the area of moral philosophy. In the first book of the Treatise, entitled Of the Understanding, Hume devoted the first part - Of the Origin of our Ideas - for explaining the basis of his philosophical system that appeals on the similar empiricist approach as that of Locke's. However, curiously, Hume had cited an explicit counter-argument - the problem of missing shade of blue - that could invalidate his whole philosophical system that is based on this central principle. Even more puzzling is Hume's complacency with this problem, and although he considers the problem as singular and exceptional, he fully admitted to this counter example and did not try to resolve it. Yet, this case merits a deeper investigation, and it is this essay's attempt to see whether his apparent complacency with the missing shade of blue would have any effect on the strength of his philosophical system, and other attempts to render this problem irrelevant. ...read more.

One of the most important components of this thesis is the fact that it's a genetic one in that it shows the origin of ideas as following from impressions - as impressions to be the cause of ideas. Again, this is proved by the constant conjunction of simple impressions preceding simple ideas, which one can do to every simple idea one may have. Another support Hume gives is that of a man born defective of certain perceptive organs, hence, missing certain impressions (e.g. sight or sound), one would not have any ideas of those corresponded with the impressions, for it is evident that deaf people also have great trouble speaking. The genetic component is important in that they validate the empiricism doctrine on the reliance of experience. Anyhow, now we can see how the problem seems to defeat the purpose of this thesis. Moreover, a counter example, from a logical standpoint, one counter example is sufficient to turn an argument invalid. So why did Hume not deal with this problem? We may try to take it as Hume claimed the problem to be - a singular case where it is not worth investing time on. Being a singular case, one may have to take the argument in closer inspection. Hume states explicitly that the man in question may have enjoyed the sights for thirty years and perfectly well acquainted with all the possible colours except one, and that may be the attempt by him to restrict this to some specific scenario. ...read more.

It is true that the impressions of light blue might very well be different than dark blue, so to speak, but to use Hume's method, it is possible to separate using our imagination the components 'light' and 'dark' from 'blue'. Thus, it is the impression of 'blueness' which is a simple impression, combined with the impression of 'light' and 'absent of light' that combine to give this multitude of shades of colours. Take this example, suppose some neutral shade of blue, let's number it blue 124, were put somewhere with light, you will be able to see blue 124. However, let's say for some reason, the room becomes lighter, certainly, the shade of blue 124 would have changed to some lighter shade of perhaps blue 200. If we vary the light in the room from darkest to lightest, it is then possible to observe from the darkest to the lightest shade of blue likewise. One may argue that the colour can be calibrated to some objective criteria, perhaps the ratio of pigments of colour blue of some sort, yet, that does not matter since all that matters to Hume is indeed only impression. Furthermore, using this example, we can also say that perhaps the subject of the experiment may have in fact encountered the particular shade of blue sometime before without acknowledging it. Conclusively, although Hume's treatment of the missing shade of blue is very limited and very complacent, it is perhaps Hume's own mistake for considering such example a 'problem', rather than the problem itself being a threat to his theory of origins of ideas. Hume Essay 1 - LT ...read more.