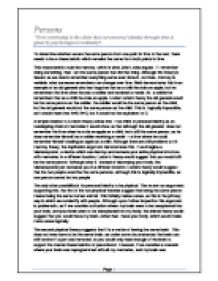 Persons "How convincing is the claim that our personal identity through time is given by psychological continuity? To determine whether we are the same person from one point in time to the next, there needs to be a characteristic which remains the same from both points in time. This characteristic could be memory, which is what John Locke argues. If I remember doing something, then I am the same person that did that thing. Although this theory is flawed, as we cannot remember everything we've ever done in our lives, memory is variable, what someone remembers can change over time. Reid demonstrates this in an example of an old general who has forgotten that as a child he stole an apple, but he remembers the time when he was a soldier and received a medal. ...read more.

Although there are still problems with memory theory, the duplication argument demonstrates this. If we imagine a teletransporter, a device which can destroy and recreate your entire physical structure with memories, in a different location, Locke's theory would suggest that you would still be the same person. Although what if, instead of destroying your body, the teletransporter just recreates you in a different location. Locke's theory would suggest that the two people would be the same persons, although this is logically impossible, as one person cannot be two people. The only other possibility is for personal identity to be physical. There are two arguments supporting this, the first of the two physical theories suggest that being the same person means being the same human animal. ...read more.

However, if we consider a scenario where your brain was reprogrammed with all my memories, and my brain was reprogrammed with all of your memories. Brain theory would suggest that you have my memories, rather than you having my brain which would make more sense. It seems as though there a various problems with both physical and psychological continuity, no features can be changed without changing the underlying self. As Hume argued, the self is just a bundle perceptions, so there is in fact no personal identity, rather it is an illusion created by the connectedness of mental states. We cannot successfully argue that a person is strictly identical over any stretch of time. Personal identity is, it seems, indeterminate - whether or not we decide to say that someone is the same is not something with a definite answer, it is something which depends on the nature of the case. ?? ?? ?? ?? Page 1 ...read more.