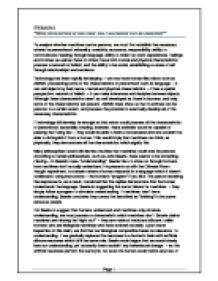 HOW CONVINCING IS THE VIEW THAT MACHINES CAN BE PERSONS?

PERSONS "HOW CONVINCING IS THE VIEW THAT MACHINES CAN BE PERSONS?" To analyse whether machines can be persons, we must first establish the necessary criteria for personhood: rationality; creativity; autonomy; responsibility; ability to communicate meaning through language; ability to reflect on one's experiences, feelings and motives as well as those of others; have both mental and physical characteristics; possess a network of beliefs; and the ability to be social, establishing a sense of self through relationships and sentience. Technology has been rapidly developing - we now have human-like robots such as ASIMO, possessing some of the characteristics of personhood such as language - it can call objects by their name, mental and physical characteristics - it has a spatial perspective, network of beliefs - it can make inferences and decipher between objects. ...read more.

Searle tries to show us through humans, how machines don't actually understand. He presents us with the Chinese Room thought experiment, a scenario where a human responds in a language which it doesn't understand, using instructions - the human's "program" if you like. The person receiving the responses is, as a result, convinced that the replies demonstrate that the human understands the language. Searle is suggesting the same follows for machines - they simply follow a program to simulate understanding. If machines don't have understanding, Searle concludes they cannot be described as "thinking" in the same sense as people. For Searle to suggest that humans understand and machines only simulate understanding, we must possess a characteristic which machines don't. Searle claims machines are missing the "right stuff" - they are made of metal and silicone, unlike humans who are biological machines who have evolved naturally. ...read more.

Some philosophers subscribe to the concept of philosophical zombies - a being who is indistinguishable from humans in all respects, except they would either be neurological zombies (lacking sentience), or soulless zombies. They would argue that if the same follows for machines, they would be considered a "zombie". Upon closer analysis, the concept of a philosophical zombie is incoherent, as the mental characteristics (sentience) cannot be separated from physical characteristics without resulting in behavioural differences. The soul is a concept for which there is no physical evidence; it would therefore follow that humans would be philosophical zombies as it could not be proven that they have souls. Taking this into account, it is hypothetically possible for machines to be persons, as there are no human qualities which machines could not one day possess. In addition, there doesn't appear to be any logical constraints restricting a machine from meeting the criteria to be a person. ?? ?? ?? ?? Page 1 ...read more.