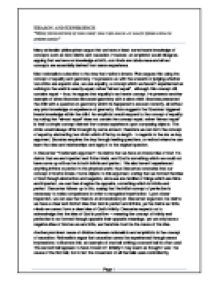 REASON AND EXPERIENCE "HOW CONVINCING IS THE VIEW THAT WE HAVE AT LEAST SOME INNATE KNOWLEDGE" Many rationalist philosophers argue that we have at least some innate knowledge of concepts such as God, Maths and causation. However, an empiricist would disagree, arguing that we have no knowledge at birth, our minds are tabula rasa and all our concepts are essentially derived from sense experience. Most rationalists subscribe to the view that maths is innate; Plato argues this using the concept of equality and geometry. He presents us with the scenario of judging whether two sticks are equal in size, we use equality, a concept which we haven't experienced as nothing in the world is exactly equal, rather "almost equal", although this concept still contains equal - thus, he argues that equality is an innate concept. He presents another example of when Socrates discussed geometry with a slave child. ...read more.

We also haven't experienced anything infinite or perfect in the physical world, thus Descartes concludes that our concept of God is innate. Hume objects to this argument, stating that we formed the idea of God through abstraction and negation, since we are familiar of things which are finite and imperfect, we can then imagine the opposite, something which is infinite and perfect. Descartes follows up to this, saying that the initial concept of perfection is necessary to make comparisons in order to recognise imperfection. Upon closer inspection, we can see that there is an inconsistency in Descartes' argument, he claims we have a clear and distinct idea that God is perfect and infinite, yet he claims as finite minds we cannot form a clear idea of God's infinity. Descartes expects us to acknowledge that the idea of God is positive - meaning the concept of infinity and perfection is not formed through opposite their opposite meanings, yet we only have a negative idea of God as we are finite, we therefore must be the cause of the idea. ...read more.

If the same thing happened a minute later, we would still regard it as coincidence. Although if this continued to happen for a fourth, fifth or sixth time, we would begin to think that clapping our hands was the cause - yet the only difference between the first and the sixth time was the repetition. Hume concludes that that the feeling of causation is simply the result of repetition and is simply nothing more than a habit. Taking all this into account, it appears that the many ideas which rationalists claim are innate actually originate from sense experience, just like all other ideas. Having even some innate ideas is not possible, as John Locke stated, at birth are minds our tabula rasa, therefore there are no innate ideas in the human mind. If there were, it would mean there are propositions which everyone would assent to, including children and "idiots" - but there clearly aren't. ?? ?? ?? ?? Page 1 ...read more.