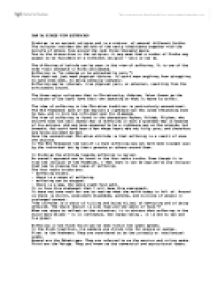 How Do Hindus View Suffering?

HOW DO HINDUS VIEW SUFFERING? Hinduism is an ancient religion and is a mixture of several different faiths. The religion includes the beliefs of the early inhabitants together with the beliefs of others from around the last three thousand years. Due to the diversities in the religion, it may seem that a number of Hindus may appear to be followers of a different religion - this is not so. The differing of beliefs can be seen in the view of suffering. It is one of the most vital concepts in Hindu philosophy. Suffering is "to undergo or be subjected to pain."1 Pain does not just mean physical torture. It could mean anything from struggling to make ends meet, to being mentally unstable. Suffering may be internal, like physical pain, or external, resulting from the environment around. The three major religions that is Christianity, Judaism, Islam (known as the religions of the book) have their own teaching on what it means to suffer. The idea of suffering in the Christian tradition is particularly conventional. The Old Testament book of Job depicts a righteous man who loses everything that he has, and in turn has inflicted upon him diseases. The view of suffering is found in the characters Zophar, Bildad, Eliphaz, who believe that the main reason Job is suffering in such a gruesome way is because of his actions. ...read more.

The individual may feel that it is them that has to cope with the misfortunes that come to them. If they accept the fact that it is Brahman who is overseer of the body then there is no need to be aggrieved. On the other hand if they do not recognise that fact then of cause the suffering they are experiencing will be as "real as do the objects of the world."8 "Suffering therefore, is only a problem so long as it appears to be a final and inescapable truth. But when it is realised that the self is not bound forever to the transient world of suffering, but rather that it is Brahman, then suffering can no longer occur."9 If one was then to ask a Hindu the question 'does suffering exist?' the answer most likely to be heard is no - suffering is only a 'fragment of the imagination.' Just as there were varying views on whether suffering exists or not, there is also differing views as to what causes suffering. Like all other religions, some Hindus believe that the cause of suffering is the result of one's actions known as karma. The Hindus attitude towards suffering is to be found in the doctrine of karma. If one can understand this doctrine clearly, then so to, the theme of suffering can be clearly understood. ...read more.

It is through this physical exercise does one become united with Brahman. As discussed previously, one of the causes for suffering was due to man's indulgence towards the material substances of the world. So if man disregards his lust for the world, then suffering itself will not be experienced. Man needs to be completely detached from the substances of the world and instead need to attach himself to the divine in order to prevent the occurrence of suffering. An additional way to solve the problem is if one is to take suffering as an illusion. "The way to alleviate suffering is precisely to realise indeed that it is nothing, at most it is a mere manifestation."16 To conclude suffering in the religion is viewed in many terms. In my personal view suffering is part of life. Life would not be life if there was no such thing as suffering. I am not saying that suffering is nothing of importance, it is, when one is brought into a world surrounded by suffering, it becomes part of life, one has to learn to cope with it. In order to apprehend the concept in detail, one has to have an in-depth understanding of the various doctrines discussed above. It can be argued whether suffering exists or not, but what is clear is whatever the decision there is a way in which to prevent suffering. Essentially it is committing the mind body and soul to God. By doing this then the life being lived will no doubt be free from distress. ...read more.