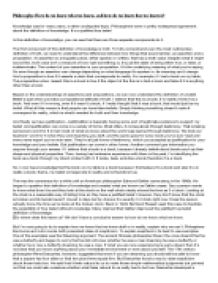 ﻿Philosophy: How do we know what we know, and how do we know that we know it? Knowledge was for many years, a rather undisputed topic. Philosophers were in pretty widespread agreement about the definition of knowledge. It is a justified true belief. In this definition of knowledge, you can see that there are three separate components to it. The first component of this definition of knowledge is truth. To fully comprehend even the most rudimentary definition of truth, we need to understand the difference between two things that sound similar, an assertion and a proposition. An assertion is a linguistic piece, either spoken or written, that has a truth value. Despite what it might sound like, truth value isn?t a measure of how right something is, it?s just the state of being either true, or false, or indeterminate. The content of your assertion is your proposition. It?s the underlying meaning of what you?re saying. So even though an assertion can change depending on what language it?s spoken in, its meaning can?t change. And a proposition is true if it asserts a claim that corresponds to reality. For example, if i had a book on my table, The proposition when I assert this is a book is true if the object of the this is in fact a book and false if it is anything other than a book. ...read more.

Say a person wants to know what time it is and they look at the clock on the wall which clearly shows the time as 3 o?clock. Looking at the clock is a reasonable way of telling time so they have a justified belief. However, they don?t know that the clock is broken and its hands haven't moved in days but by chance it is exactly 3 o'clock right now. Does the person actually know the time as he looks at the broken clock. Back in 1948, Bertrand Russell used this case to illustrate the possibility of true belief without knowledge. Many claimed that Gettier disproved the justified true belief definition of knowledge. So where does this leave us? We don?t have a conclusive answer to how do we know what we know. But I?m now going to try to explain how we know that we know stuff or in reality, explain why we can?t. Philosphers like Hume and John Locke both presented ideas of scepticism. To explain sceptiscim, its best to use examples. One of the examples was the Dreaming argument. The ancient Chinese philosopher Duan Chu once dreamt that he was a butterfly and began to worry that he did not know whether he was a man dreaming he was a butterfly or whether he is now a butterfly dreaming he was a man. ...read more.

I break my nose on a post that comes in my way; I step into a dirty kennel; and, after twenty such wise and rational actions I am taken up and clapped into a mad-house.? Reid is basically suggesting that it is in our best interest to just assume there is an external world, to think otherwise would be mad. He agrees that Hume and Locke have arguments, but that those arguments should be first founded on common sense. If there is a battle between common sense and philosophy, it should be philosophy who makes room, because to discount our common senses is to throw away everything we know about reason and perception. We need common sense to ground our ideas and allow us to function daily without questioning our very move. Modern day philosophers such as David Rorty are strong proponents of ruthless pragmatism towards philosophy. The truth is we will never truly understood how we know what we know, and how we know that we know it because we can never truly understand the world we live in. We could all be figments of my imagination, or a simulation of a superior being, but whats the fun in living life like that. This leaves us questioning why do we do what we do everyday, why do any work if we?re just a simulation, or get out of bed in the morning. Philosophy is meant to help us not hinder us , and sometimes question like this can never be truly answered. ...read more.